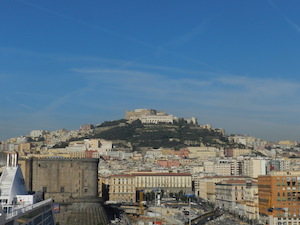 Naples Italy is a city rich with cultural places, monuments, and abundant in history and artistic interest. There’s the neighboring Mount Vesuvius, still an active volcano, that very famously destroyed the nearby Roman city of Pompeii.

Traffic in Naples is, at best, described as pleasurable chaos. Neapolitans say that traffic lights are merely a suggestion. “Cross the streets at your own peril,” they say.

This bustling city is one of the most popular tourist destinations, especially amongst Italians. As a port city off the Mediterranean, breathtaking panoramas are easily accessible. Also, this is where the pizza originated. The best I’ve tasted was from a small ristorante just off a piazza. In this fascinating city, history and legends are often intertwined.

There is much curiosity about one of the ancient castles in Naples. Castel Nuovo, regularly called Maschio Angioino, is one of the leading architectural and landmarks of the city. Medieval and renaissance architecture adds a veil of mystery captivating the imagination. From time to time locals will repeat some of the most famous legends that arise from this castle. Dark legends that involved crocodiles from the Nile, of prisoners, barons and spent lovers. Today, this monumental symbol houses the Neapolitan Society of Homeland History and Naples Committee of the Institute of Italian Risorgimento. Additionally, inside is a civic museum.

Maschio Angioino gets its name from Charles I of Anjou, who was one of the most powerful European monarchs in the second half of the 13th century. 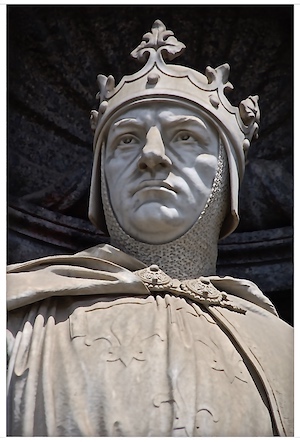 He had the castle built in 1266, ascending to the throne of Sicily, he moved its capital from Palermo to Naples.

The castle’s commanding size overshadows the Piazza del Municipal. Situated at the Bay of Naples just off the blue Mediterranean Sea, it is the first castle visible from the sea. History gives it high cultural interest as it was used as temporary residence hosting renowned personalities visiting Naples as guests of the royal court.

Originally, the complex structure had a trapezoidal plan, five big protection towers with a moat that surrounded it. Inside each tower was a Catalan staircase. The sculpture of a triumphal arch built in marble separated the two towers of Di Mezzo and di Guardia. Built to celebrate Alfonso I of Aragon’s triumphal entry into Naples.

As in every castle, everyone is aware that there are prisons below in dark, humid chambers. Initially used as a wheat warehouse, it was converted into a prison. The pit was used to lock up prisoners condemned to harsher sentences or death. According to legend, some of these prisoners started mysteriously disappearing.

The Palatine Chapel is the only original part of the castle that remains. The Roman ruins still have fragments of frescoes atop Gothic windows. The castle underground consists of two zones, located in the space below the Palatine Chapel, the Miles Trench and the Baron’s Prison. The pit converted from grain storage, was later christened the Crocodile Pit.

Possessing one of the most disturbing personalities in the history of Naples, folklore gave her the nickname, Joan, the Bloody. According to legend, a crocodile was shipped to Naples from the Egyptian Nile on her wedding. The shipment was ordered by the beautiful and seductively cruel Queen Joanna II, who married James of Bourbon. Her reign began at 1414 until her death in 1435. She had an insatiable appetite for lovers and male favorites, at times, rumored to be even commoners or slaves. To keep her husband from discovering her little dirty secrets and avert scandal, she got rid of the evidence. The queen would send her spent lovers through a trap door to the pit with sword points and razor blades. The worst part of the pit was a ferocious crocodile who would ingest the prisoners.

Famous philosopher, Benedicto Croce in his book, Neapolitan Stories and Legends, described how the prisoners would disappear from the dungeon. To find out how prisoners escaped, they monitored the pit closely only to discover a grisly scene. The crocodile penetrated from an opening connected through an underground hole. It then dragged the victims into the sea, by grabbing them by the legs and then devouring them.

The Conspiracy of Barons

Another version of the myth involved Ferrante of Aragon, king of Naples (aka Ferdinand I) who ruled from 1423 to 1494. The Neapolitan aristocracy revolted against the king, plotting to dethrone him. With the Pope as the only authority to question the legitimacy of Ferrante as the king of Naples, rebels isolated the former capital. This would allow the Pope to enter the kingdom of Naples and replace Ferrante with another candidate.

The king met with the rebels at the Castel del Malconsiglio, presenting the rebels with a faux agreement that seemed to satisfy them. He further deceived the influential barons with an invitation to his granddaughter’s wedding banquet in the Hall of Barons at Castle Nuovo. Once there, he had them all arrested and executed. As the legend goes, he fed them to the ravenous crocodile and erased all evidence of the crime. Ferrante himself used a large poisoned horse thigh as bait and had it fed to the crocodile. Once dead, he had the animal stuffed and hooked it on the entrance gate of the castle.

During 2004, Naples excavations at the dungeons of Castel Nuovo, four secretly stored coffins, were brought to light. Those were probably the nobles who had participated in the Baron’s conspiracy of 1486. It appeared that the corpses’ attire was in the fashion of the XIX century.

A crocodile skeleton was uncovered in excavations for the subway at Piazza Municipal. For locals, the remains belonged to the starved crocodile of lore. It seemed to confirm their beliefs of the passionate Neapolitan queen legend. On the other hand, for the skeptical, it was simply a skeleton of a crocodile.

Did this solve the mystery? Not entirely. I believe that in every myth, there is a shred of truth. And here is some of that truth.

The Isotopic Research Center for Cultural and Environmental Heritage dated the bones to between 1643 and 1666. Additionally, after studying the teeth of the crocodile remains, it was estimated to be over 6 feet long. With a precision of 95% accuracy, they determined that it belonged to a species of crocodiles from the Nile. ~TPM

About Marilou Trias—Marilou is a travel writer and photographer based in Oahu Hawaii. She focuses on sharing her experiences of cultures through food, history, and entertainment. She was born in the Philippines and grew up in Seattle, where she got her education, worked, and retired from the public utility, Seattle City Light. See more of Marilou’s work HERE.