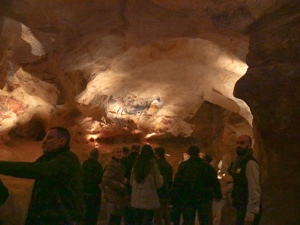 “This is not a reproduction, it is a work of art,” proclaimed the then president of France, Francois Hollande, after officially opening The International Cave Painting Centre at Lascaux early in December of last year.

For four years and at a cost of 60 million euro (approximately $66 million), a team of specialists had been hard at work recreating a cave system discovered by a group of teenagers in 1940.

The cave was found to contain paintings and carvings dating back around 20,000 years. The French government declared the cave system “of national importance.” The public was allowed access from 1948 until 1963. But scientists began to realize that carbon dioxide from the visitors was damaging the paintings and the area was closed.

A replica was built into the hillside where the original cave was found. With technology improving all the time, a small team was given special permission to begin a 3D scan of the original site including every detail of the paintings and carvings. Artists were brought in to painstakingly paint the animals, such as deer and bulls and even, some say, a unicorn, millimeter by millimeter.

Director Guilliam Colombo says the real cave lies less than half a mile from where the new center has been built, a center that follows the curve of the hillside so it doesn’t dominate the landscape.

Visitors are taken on the tour by a guide and each person has an interactive tablet in their own language. It really is a walk back in time. You hear a teenager calling out as he searches for his dog, Robert, who has fallen down a hole on the hillside near the village of Montignac in the Dordogne.

Through a door you find yourself in almost total darkness. Then, up to the left, a shaft of light comes through the hole where Robert disappeared. 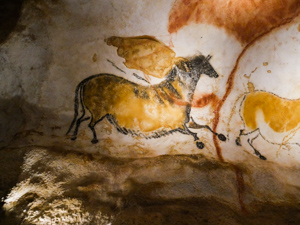 As you make your way into the cave system, the paintings and carvings begin to appear just as they did to the group of friends who had come to help search for the missing dog.

One can only imagine what they were thinking as they made their way deeper into the cave. The only survivor of that group, 90-year-old Simon Coencas, says, “We thought we would discover hidden treasure and in a way we did.”

Director Colombo points out how the early artists used the contours of the rock to paint the animals using paints made from ground stone, blood, water, and vegetation. You can only marvel at the workmanship of our early ancestors. There are fine lines to provide detail, like the hairline on the back of a horse; you can see perspective in a group of cattle; another group known as the swimming deer is depicted with only their heads showing above a darker line representing a river.

As the cave visit ends, you move into a huge area where you can see how the exhibition came together. There is also a 3D cinema show and a virtual tour of the cave system.

The center is truly a wonderful place and the amount of work that has gone into replicating the original cave is simply breathtaking.

Not only will you feel the excitement of those young teenagers exploring the cave and discovering painting after painting, but you will also marvel at how on earth people 20,000 years ago — using only oil lamps to see by — could produce so much stunning artwork.