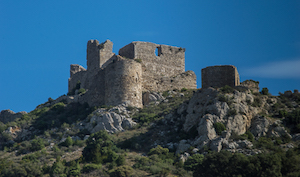 At the turnoff to Chateau d’Aguilar, outside the petite village of Tuchan, the narrow road is barely more than a paved track winding through vineyards clinging to the sides of the Corbières mountains deep in the Languedoc-Roussillon region of southwest France. As the ascent steepens, the underpowered car struggles even in first gear, finally wheezing to a stop in the gravel parking lot. The chateau ruin stands alone, a testament to the bloody demise of the Cathars.

In the 10th and 11th centuries, Cathars found support in the region, practicing their breakaway version of Catholicism without interference, despite being labeled heretics by the church in Rome. Rejecting all sacraments save baptism, they believed the papacy perverted Christianity by its dogma and extravagant living. By contrast, their strict moral code and vows of poverty inspired the labels “parfaits” or “bons hommes” and “bonnes femmes” to signify their quest for purer faith. Pope Innocent III, fed up with the spread of and support for Catharism, commissioned the Albigensian crusade in 1209 to destroy them by any means possible.

Nearly fifty years of bloodshed and atrocities ensued, including horrific acts of mass execution, mutilation, and extended sieges. One spiritual leader of the crusade is said to have declared, “Burn them all. God will recognize His own.”

The visitor’s reward for a steep climb on foot along a twisting rock-strewn path is a stunning 360-degree view across the Corbières range, with countless hectares of vineyards carpeting the slopes. One can almost feel ghosts of the Cathars who fled the brutal crusaders to seek asylum here from the sympathetic lords of Termes, owners of Chateau d’Aguilar since the 11th century. After the crusade ended in 1255, Aguilar became an important redoubt on the Franco-Aragon frontier until the 1659 Treaty of the Pyrenees settled the border between the two countries. 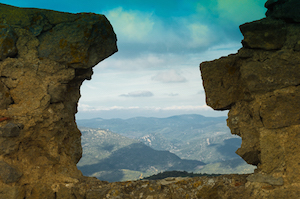 If the drive to Aguilar is memorable, the six-mile jaunt on to Chateau de Quèribus is breathtaking. The sparkling day of our visit began to give way to intermittent clouds casting a thin grey shawl over the shoulders of the mountains, creating vistas of atmospheric depth.

More daunting than Aguilar, Quèribus looms from its perch. A vertiginous climb from the visitor center up a rocky path leads to the chateau entrance, then a series of rugged stone steps ascends to the first of several lookouts on the ramparts. A €2 (approximately $2) audio guide helpfully clarifies the layout and purpose of the various chambers.

Gusty winds make walking along the ramparts a challenge. Though there was no rain forecast for the day of our visit, the weather up here changes quickly, and the prospect of being stranded is unnerving. Perched on a narrow, knobby ridge line, the chateau reaches nearly 2,800 feet in altitude and was the last Cathar stronghold to fall to the crusaders. On a clear day the panorama extends as far as the Pyrenees to the west and the Mediterranean to the east, but on that day haze and clouds obscured our view. 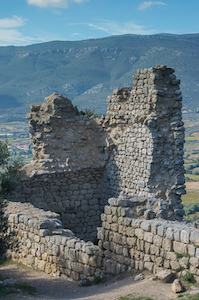 Like Aguilar, Quèribus became an important part of the line of strategic defense of the French border with Aragon, one of the “five sons of Carcassonne” also including Puilaurens, Peyrepertuse, and Termes, all on the Cathar Trail.

The tragic legacy of the Cathars is preserved in chateaux, museums, and abbeys throughout a large swath of countryside southwest of Narbonne and north to Albi. The Association des Sites du Pays Cathare (www.payscathare.org) offers a €2 Passeporte allowing reduced entry fees to many of these sites along the Cathar Trail.