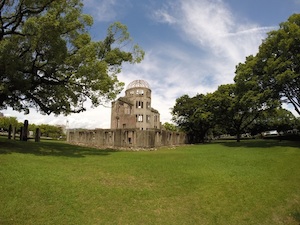 It is a beautiful sunny August day in Hiroshima, Japan. The cool breeze off the river is welcome relief from the hot summer day. But amidst the wonderful weather stands a structure infused with sadness and pain, the reason for my pilgrimage. The Hiroshima Industrial Promotion Hall, now known as the A-Bomb Dome, is an imposing reminder of that day in 1945 when Hiroshima was devastated by the first aerial attack of its kind. The atomic bomb missed its target bridge a few meters away and was dropped almost directly on the Promotion Hall, engulfing the building from the inside out and killing all those inside. 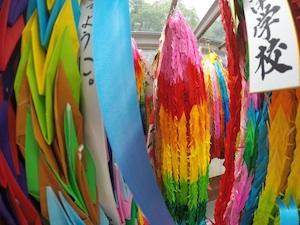 Across the river, a visitor rings a large bell in memory of all those who suffered that day and throughout the war. Take a moment to strike the bell yourself in an otherwise quiet reflection, then travel further into the Peace Memorial Park to the Children’s Peace Memorial, where thousands of colorful paper cranes made by elementary students around the world are strung together as symbols for peace and remembrance.

At the other end of the park rests the Hiroshima Peace Memorial Museum. It houses relics of the tragedy — from the atomic warhead to personal narratives — and truthfully can be a bit overwhelming. I was shocked to see a human shadow burned onto the steps of the local bank — a person patiently waiting for the bank to open. Sometimes, I reflected, it takes extremes to make people understand the horror and tragedy such warfare can bring. The museum also chronicles the multiple attempts by the numerous mayors of Hiroshima to end nuclear testing and promote nuclear disarmament. Well worth the emotional tumult, it is an educational experience I strongly recommend (though perhaps come prepared with tissues).

After the bombing, many people said that nothing would ever grow here again. The Phoenix trees growing next to the museum defy expectation; they not only survived the blast but continue to thrive. The Motoyasu River, which runs through the city, is embraced by bounds of trees and flowers, a testament of the hope and revitalization that seems to fill Hiroshima. 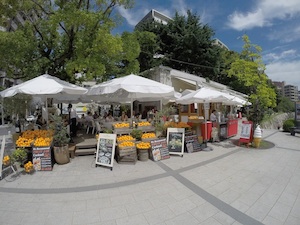 While you stroll along the river in awe of the natural beauty, enjoy a bit of lunch at Caffe Ponte. The orange and grapefruit juices are freshly squeezed from the fruits stacked outside the restaurant. They offer a variety of pastas, pizzas, and salads, as well as desserts, wines, and fresh cocktails. Cold grapefruit juice is the perfect refreshment in the summer heat. Paired with oysters in cream sauce over pasta, it is a delightful meal. The service and location are also incredible.

After a delicious lunch, what could be more enjoyable on a lovely summer day than to continue exploring via river cruise? The World Heritage Cruise boat leaves the Peace Memorial Park dock (right below Caffe Ponte) for the historic island of Miyajima. Buy a one-way ticket and exchange the stub at Miyajima for a discounted return. Staring out at the city, you can see the vast transformation that Hiroshima has undergone in the nearly seven decades since the city was devastated. It is a city of contrasts: despair and hope, destruction and growth, but it will always remain to me a constant reminder of the seemingly never-ending struggle between war and peace.

August 6, 2015 will be the 70th anniversary of the bombing. Annually, there are events such as the Hiroshima Peace Memorial Ceremony, with guest speakers, and the Lantern Floating Ceremony, in which lanterns float on the river as petitions for peace. Additional special events for the 70th anniversary are to be announced.