The morning sun is warm and the large cafe umbrella casts a shadow onto the cobblestones of Zrinyi Square. Three lofty street entertainers stride onto their stony stage, their stilts lifting them high above the growing crowd and street trader stalls. Their rhythmic drum beat and quick tempo horn playing draws an attentive audience and the jovial horseman laughs and jokes with the crowd. His clever costume and skill of jumps and skips to mimic his prancing stallion make you forget there is no horse at all, just a man on two long legs. 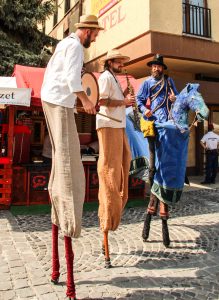 The cobblestones extend from under the cafe’s shadow and reach across the square to the craft market traders attending their displays of vibrant macrame figures, local souvenirs, and handcrafted jewelry carefully arranged on hessian-covered stalls skirting the streets that lead from the square. The large stage with clusters of red and blue spotlights and large towers of speakers dominates the square in front of the parish church. A pirate, no… an Arabian Knight, no… a Turkish warrior… paces quickly across the square and down the street lined with stalls of trinkets that leads toward a famous castle. Preparations for the Zrinyi Napok Szigetvar annual festival are almost complete as the cobbled square fills with excited visitors.

It is Saturday, September 9, the nearest Saturday to the seventh, and the penultimate day of four days of musical and patriotic celebration that marks Szigetvar’s historic battle to save Hungary from the Turkish invasion of 1566. Szigetvar translates to Island Castle and it was the defense of the castle that earned Szigetvar its place in Hungarian history. Captain Miklos Zrinyi, a Croatian nobleman with just 2,500 Hungarian and Croatian soldiers, stood against the mighty Sultan Suleiman’s 80,000-strong Turkish army. It was at Island Castle that Suleiman was killed when Captain Zrinyi’s warriors fought to the last man before the Turkish flag was raised above Szigetvar and Hungary for the following 123 years.

The Turkish warrior and following crowd cross the bridge over the river and pass through the castle’s tunneled brick and stone archway before bursting onto the stage for Szigetvar’s siege reenactment. A temporary wall lines the far side of the inner moat manned by Hungarian soldiers in their dark green/almost black uniforms with red sashes and brown boots. Hordes of raiding Turkish warriors line the near side of the moat. Red turbans, yellow tunics, bearded tanned faces, black pantaloons tucked in boots, pistols pushed into crimson sashes, sabers and daggers flashing in the sunlight. 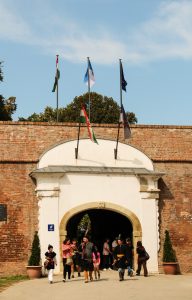 There is a small charge to pass through the castle gateway, but apart from any varied music concerts you may want to attend during the festival, the exhilarating entertainment and events are free.

Suddenly the clap of gunfire rings in your ears, the blast of cannon fire resonates in your chest, and the air is filled with white wind-blown smoke. The siege has begun. Roaring Turks storm the castle walls waving their sabers, skirmishing cavalry charge the line, and bursts of gunfire volley from the defending wall of soldiers. Short pauses for talks of surrender and reloading of weapons intersperse the fighting. The flag is raised, the fighting stops, silence prevails… for tribute.

Following the tribute, the weary warriors return to their camp. Authentic colored and patterned Arabic style tents form a canvas avenue and courtyard beside the castle wall. Wooden A-frame armament and chain mail tunic racks receive the returning sabers, long guns, and glinting armor. A bravado spirit of chat and banter erupts, pipes are lit and smoked, and the tobacco aroma wafts and mingles with the odor of tethered cavalry horses. The smoulder from a blacksmith’s hearth lifts dark musky smoke that drifts through the camp mixed with the bouquet of goulash cooking on open campfires. Under the colored awnings tables are laid with wooden spoons and plates and pewter goblets. The sultan’s carved and decorated chair heads the table awaiting the banquet. Only the rhythmic beat of performing singers and dancers resounding from the amplified speakers in Zrinyi Square remind you this is not 1566. 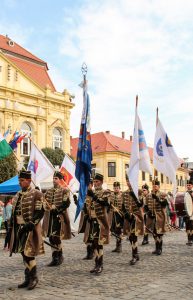 Szigetvar has changed little since Zrinyi’s contribution to history, which adds real atmosphere to the festival of today. In 1966, for that contribution, Szigetvar, on the 400th anniversary of the heroic event, received the Town title. And, in 2012, was awarded recognition as Hungary’s Civitas Invicta, “most heroic town.”

Sunday marks the last day of the celebrations with a spectacle to be remembered. Marching from the castle and into Zrinyi Square beating drums, resonating trumpets, waving flags, and prancing cavalry horses lead a patriotic procession. Hungarian, Turkish, and Croatian soldiers and warriors dressed in their finest colorful costumes, trooping with traditional folk bands with puffed-out cheeks blowing their crying pipes, present themselves and make their salute of respect before returning to Island Castle.

For a small town, Szigetvar and Island Castle have other varied and historic attractions to offer, too. Early September weather in Szigetvar is warm and sunny, just right for taking a long weekend break, experiencing a lively historic and patriotic extravaganza, then relaxing in the warm therapeutic water of the town’s spa before returning home.

Szigetvar is situated in Hungary’s southwest province of Baranya and is easily accessed by road from Budapest, on highway 6, or by train, alighting midway between Pecs and Barcs stations. Hotel accommodation is plentiful with help available from the Szigetvar tourist center, +36 73 311 802, turizmus@tdmszigetvar.hu, info@tdmszigetvar.hu, and http://www.tdmszigetvar.hu.