In 1997, the statue of a young girl was moved from Bonaventure Cemetery in Savannah, Georgia, to a city museum.

The statue, a little over four feet in height, had no special historic significance; despite that, it was moved for its own protection as well as to prevent damage to the cemetery plot where it had stood in relative obscurity since the late 1930s.

The need to move The Bird Girl, as the statue was nicknamed, into protective custody speaks volumes about where the city of Savannah has cast its cultural lot. The city that epitomizes the heartbeat of America’s South went to a movie in 1997 and hasn’t been the same since. 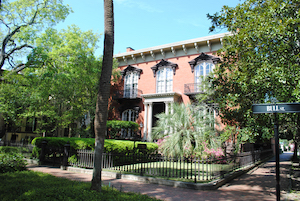 Instead of diligently mining its rich historic ore dating back to 1733, Savannah chooses to strap its identity to a movie (and the book on which the movie is based), a true case of life imitating art.

Midnight in the Garden of Good and Evil centered on a murder charge against a prominent citizen while immersing itself in the facade of Southern gentility behind which hid a gay relationship (taboo at the time), a slight bit of voodooism, and quirky characters topped by a drag queen known as The Lady Chablis.

The Bird Girl appeared on the cover of the book and promo material for the movie but otherwise had nothing to do with the plot.

With me so far?

As evidence of tourists’ passion for the tale, the statue had to be moved to prevent its being picked apart by souvenir-hungry tourists. Savannah’s commitment to this scenario is based, obviously, on supplying to meet the demand. You can buy little replicas of the statue, copies of John Berendt’s book, and DVDs of the movie in almost any Savannah souvenir store. 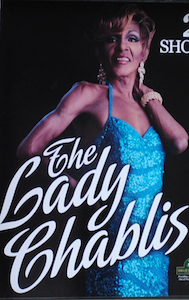 And The Lady Chablis, whom you’d assume to be a fictional character, still makes public appearances with a monthly show. In fact, the line between art and reality blurs even more because he/she is listed in the movie credits as playing him/herself.

Bus and horse-drawn city tours point out where “Jim” did this or that, mansions used by the movie makers, Bonaventure Cemetery where voodoo was practiced, and where the statue stood.

With or without the help of Hollywood, Savannah still spins the kind of ambiance you can’t buy; it has to have been earned through centuries of historic realities. Cobblestone streets and walkways lead past elegant mansions and streets cloaked in Spanish moss. The waterfront commercial district is accessed by steep concrete steps amid ancient walls that must surely have echoed the cannon fire of both the Revolutionary and Civil Wars.

Meanwhile, the city above the riverfront is divided into intriguing squares. Stores, hotels, and residences form the four sides marking off common areas, usually small parks with seating areas among the magnolias and bougainvillea, perhaps a statue to a local hero symbolically hinting at decades of resistance against the temptation to convert prime real estate into commerce. There are 22 such squares; two others passed into oblivion at some point. You can imagine yourself in Europe at times, with the horse-drawn tourist carriages rattling over the cobblestones amidst gaslights from a past century.

In the movie, Kevin Spacey weaves a spellbinding characterization of a wealthy Southerner who measures his importance by how the world envies the posh parties he throws and how citizens drool for an invitation. The renown of these parties is gauged by the fact that John Cusack, a “fluff” writer from a big-city magazine, has actually been sent to cover the story, which will require the demanding challenge of describing the flatware, the decorations, and the fancy pastries.

It paints a picture of Savannah “royalty” of a past era, paying painstaking attention to trivial details that somehow define social hierarchies. Meanwhile, the fringe elements are hovering around the edges.

If you’ve seen the movie a few times, it’s easy to step right into the set, even today. The Spanish moss, the elegant mansions, the drawl: in one respect, when the city and the movie went to the marital altar, they chose perfect spouses.

Now, if you knew nothing about any of this before, here’s the real zinger: it’s not fiction. In fact, Jim Williams, the party-thrower, stood trial four times for the 1981 murder of a 21-year-old hot-headed man believed to be Jim’s “companion.” Author John Berendt did what was described as a “graceful and lyrical” job of describing it all in a best-selling book and with the hauntingly mystical movie. The next generation of tourists came to town demanding it all on their menu of attractions. Savannah continues to serve it up. 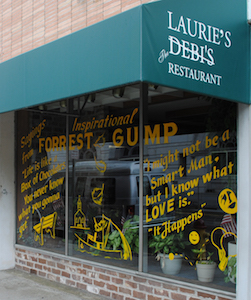 But if you’re in town on a movie odyssey, you will also want to visit Debi’s (now Laurie’s) Restaurant on West State Street. This is where Forrest Gump’s “girlfriend” worked.

Similarly, no visit to Savannah would be at all right without eating at The Lady & Sons, Paula Deen’s restaurant on Congress Street where you can dine on the celebrity chef’s Southern cuisine. Unless they’ve changed the routine recently, don’t call for reservations; show up around 9:30 a.m. at a side door where someone will be taking bookings for that night.

And if you visit Savannah during the shoulder season (spring and fall), you can get a good deal on rooms that are actually small suites at the Inn at Ellis Square and The Planter’s Inn at Reynolds Square. But there are probably 160 hotels from which to choose and it’s not hard finding something pleasant.

Definitely walk and shop the riverfront, where you’ll find casual dining and colorful stores. And you can always take a horse-drawn “ghost tour” to check out Savannah’s claim to be the most haunted city in the U.S. If you’re looking for something different, head for Tybee Island for a day of oceanfront relaxation. 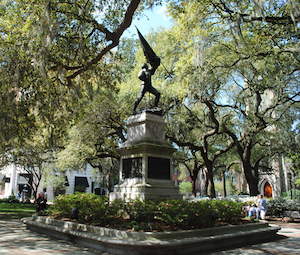 At night, the action is in the City Market between West Congress and Julian Streets, next to Franklin Square. You’ll find street musicians there and on the River Walk. There’s rarely a shortage of entertainment.

Back to the point made at the beginning, that Savannah turns its back on its real history in favor of History by Hollywood. Quite frankly, how many tourists would flock to this city to learn about the cotton industry between 1870 and 1920, the boll weevil outbreak, the rise and fall of the slave population, or even the adventures of the Civil War? (The city was captured by General William Tecumseh Sherman in 1864; he offered it to Abraham Lincoln as a Christmas gift.) In addition, Savannah played a significant role in manufacturing and shipping.

The city’s tourist industry was slow in the 1970s but has accelerated exponentially from that time. One item to note is the city’s St. Patrick’s Day celebration is believed to be the second largest in the U.S., possibly because there is little restriction on public alcohol consumption in the historic district.

Oh, and Wikipedia declares: the city’s tourism industry “grew in the 1980s and was solidified by the best-selling 1994 book and 1997 motion picture Midnight in the Garden of Good and Evil, both set in Savannah.”