There is no question for me that when it comes to food Sicily can’t be beaten. The island offers the best of Italian cuisine spiced up with North African and Arabic influences, due to the island’s historical location as an important hub along the Mediterranean trade route. Palermo, Sicily’s capital city, has its own unique cuisine and a thriving street food culture that easily ranks amongst the world’s largest. But first you have to know where to find it, as many of the offerings retain an air of secrecy and may require a little local knowledge to track down. 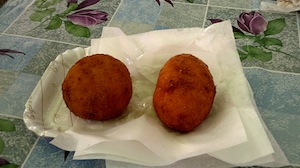 First there are the one or two items that you may already have heard of. Arancine (“little oranges”) are filled, fist-sized balls of saffron-infused rice, floured and breaded and then deep fried. The traditional filling is a ragu of minced meat, tomato, and peas, although now a few other varieties also exist. Arancine are well known and should be easy to track down. One particular favorite of mine is panelle (again deep fried): squares of chick pea flour batter made with parsley and oregano, usually eaten in bread rolls with a squeeze of lemon and best eaten hot. Another Sicilian classic is sfincione, a soft, deep pan pizza-style bread topped with breadcrumbs and anchovy.

Now on to the lesser-known offerings, those which may need a bit of courage to try. Pane con milza, or pane ca meuza in the Sicilian dialect, amounts roughly to the Palermitano version of a doner kebab. In English the name translates literally as “bread with spleen” and that’s pretty much what you get — chopped and boiled offal mainly consisting of spleen and lung served traditionally in a local type of bread known as vasteddu and with a splash of fresh lemon or creamy ricotta. You’ll have to trust me when I say that it’s a lot nicer than it sounds and worth trying at least once. Pane con milza still should be relatively easy to find, if you keep an eye out for the signs.

Stighiuola and fritella will be less easy to find. Stighiuola are the barbecued small intestines of goats, cooked on skewers and then chopped into bite-sized pieces and, again, best eaten with lemon. You can find them at large trailers, like hamburger stands, as soon as it starts to get dark. The stands rarely change location so most locals will know where to go to get stighiuola; however, if you have nobody to ask look out for deep plumes of smoke rising up into the sky from about 6 p.m. onwards.

Fritella is the most secretive of the lot. Sellers can be found in random places at random times, like undercover agents. They can be recognized easily, though, as they will be holding a large wicker basket covered by a cloth, and usually an umbrella. You buy fritella in euro worths (one euro is roughly enough for one person), at which point the seller will dip his hand into his basket and pull out a handful of steaming-hot offal chunks before offering it to you in a paper cone. I can’t really tell you what animal fritella comes from or what parts of the animal it comprises, but you will have to trust me when I say that it is tasty and filling.

If you’re brave enough to try one of the last three snacks and don’t like it, you may want something to take the taste out of your mouth. Luckily, in Palermo you’ll never be too far away from someone selling canoli, cartocce, or, even better, gelato. Sicilian ice cream, for me, is the best you can get anywhere on the planet, and I usually opt for fragola e panna (strawberry and cream) — a dollop of strawberry ice cream with fresh dairy cream on top. Delicious! But there are plenty of other flavors to tempt you.Sic