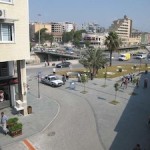 By David Elliott I tucked into my Antioch kebab in an outdoor restaurant packed with Ramadan fasters, a gale blowing up from the ancient river that bisects the city sending burkas billowing on one side and blowing designer sunglasses and packs of Marlboro across Formica tables on the other. Miniskirts and veils mix easily in modern Antakya, a refreshingly cosmopolitan … END_OF_DOCUMENT_TOKEN_TO_BE_REPLACED

By Bina Joseph What is the link between a sow and her piglets and the twelve apostles? The answer is found at “the end of the end of the world.” One of Australia’s most visited landmarks was originally known as the Sow and Piglets! Muttonbird Island, near Loch Ard Gorge, was the Sow, and the smaller surrounding rock stacks, the Piglets. This unromantic moniker was … END_OF_DOCUMENT_TOKEN_TO_BE_REPLACED 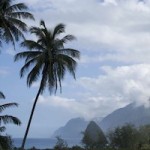 By Fern Innes Darkness hung low, encompassing the island in its wet grip even as the sun struggled to break over the horizon. It was early in the morning as we stepped off the puddle jumper onto the soil of Molokai. As dawn turned into a diffused gray light, my first glimpse of Molokai was that of mountains rising up to the sky, completely shrouded in mist. But behind the … END_OF_DOCUMENT_TOKEN_TO_BE_REPLACED 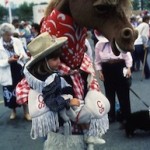 By Habeeb Salloum The annual Calgary Stampede is by far that city’s greatest tourist attraction. Held at the beginning of July every year, the Stampede is a renowned rodeo that celebrates the city’s ranching heritage. Every year more than one million attend this largest cowboy contest in the world. For ten days the people of Calgary, a city of over 1.1 million, put away … END_OF_DOCUMENT_TOKEN_TO_BE_REPLACED 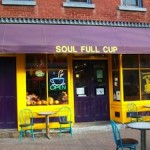 By Cynthia Archer  Take a stroll along Market Street in downtown Corning, NY, on a Friday evening in November, where the trees are wrapped with tiny white lights and storefronts tempt you with their beautiful arts and crafts and glass work, and your sense of smell will lead you to a lively little coffeehouse called Soul Full Cup. Once you open the wood and glass-paned door … END_OF_DOCUMENT_TOKEN_TO_BE_REPLACED