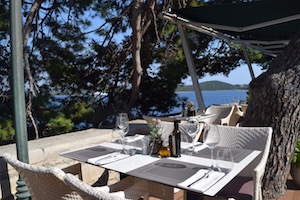 Eclipsed by its flashier neighbors like Dubrovnik to the south and Split to the north, Korcula is not overrun with tourists. The Croatian tourist slogan “the Mediterranean as it once was” is an oversell for other locations in Croatia, but it rings true in Korcula. There the ebb and flow of daily life are leisurely, almost sleepy, reflecting a culture of the past and present.

Korcula island located just a mile off the mainland was settled by the Greeks as far back as the sixth century BCE, they named it Black Corfu after the Greek island of Corfu and black because it was blanketed with dense pine forests. It’s hilly terrain, full of olive groves and rolling vineyards, produces olive oil and wine that along with fishing and tourism is not only a mainstay of the local economy but an integral part of the culture. Two of the most popular Croatian white wines, Posip and Grk, are grown on the island.

When the former Yugoslavia erupted into civil war in 1991and was, years later, divided up into several countries – Croatia, Bosnia, Herzegovina, Macedonia, Montenegro, and Serbia – Croatia came away with thousands of miles of coastline and a corresponding number of islands that closely hug and cascade down its jagged length. 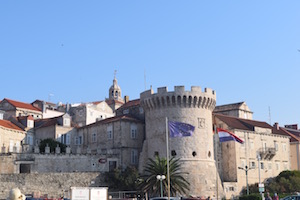 That coastline is nothing short of stunning, easily rivaling any coastline in the Mediterranean. Its dramatic bluffs, sheltered coves, and pristine beaches serve as a backdrop to equally stunning and amazingly preserved medieval towns that look like background settings for a movie or television which of course is exactly what they have been used for – think of King’s Landing (i.e., Dubrovnik) on Game of Thrones.

Celebrities aboard their mega-yachts quietly cruise up and down the Adriatic Sea in relative obscurity until disembarking at one of the many towns, each with its own distinct personality, that dot the hundreds of miles of coastline. Growing numbers of cruise ships and tour companies guide the less well-heeled from all corners of the globe who come here curious to see the natural beauty, swim in crystal blue water and enjoy the shops, restaurants, and bars at prices considerably cheaper than what they would pay in Spain, Greece or the south of France.

Its historic town, also called Korcula, sits on a rocky peninsula jutting out from the island in the shape of a thumb. From a distance, the town looks like it was carved out of a single rock – its cream-colored buildings, huddled tightly together and punctuated by terra-cotta roofs, are encircled by a thick wall with majestic towers looking every inch a miniature fortress on the sea.

The fortress was built to protect against naval fleets from rival city-states like Genoa, Ragusa (today’s Dubrovnik), and the Ottoman Empire. By the end of the 13th-century, Venice had become the dominant naval power, Venetian galleys and sailing ships patrolled the waters of the Adriatic and ruled Korcula for 400-hundred years leaving its distinctive imprint on everything from the architecture to the culture to the cuisine. 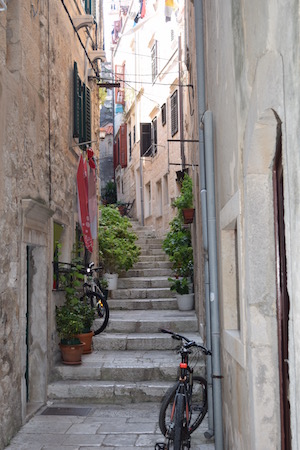 Built on a small, circular hill resembling the top half of a globe, the streets are designed in a fish-bone pattern. A narrow spine running down the middle of town serves as the main street with rows of even narrower streets crossing from east to west created of steps that run up and down from the main street. At the pinnacle of the hill sits the huge four-aisled Cathedral of St. Mark with its miniature square outside its front door and a belfry reaching for the sky.

Venetian palaces line the streets; intricately stone-carved family crests where prominent families once lived hint of a past grandeur; arched bridges and gothic windows are evident everywhere, and the winged lion (the sign of Venice) greets visitors at the ceremonial entrance to the town.

As narrow as the passageways are, the winds blow through the town constantly. The maestro wind blows in the summer, warm and refreshing, and the streets west of the main artery are straight, inviting the wind into town. The bora wind comes from the south and is strong and threatening, so the streets on the east side of town are crooked to keep wind out. 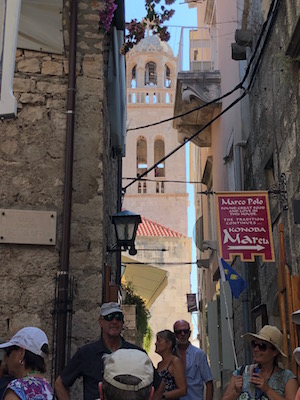 Although Korcula claims to be Marco Polo’s birthplace, and there are plenty of businesses peddling that fact, evidence is much stronger than he was once imprisoned on the island after the Battle of Korcula between the Genoese and Venetian navy fleets. When the Genoese won that battle, Marco Polo, a Venetian commander, was taken prisoner and briefly imprisoned on Korcula before a ransom was paid for his release.

Tradition is important, and Korcula is the only place left in Croatia that still performs the Moreska, the traditional sword dance which pits the Red King (Christians) against the army of the Black King (Moors) over the honor of a Korculan lady. The ornate black and red outfits and the clashing of swords are quite dramatic, and the performance conducted in town regularly is worth seeing. 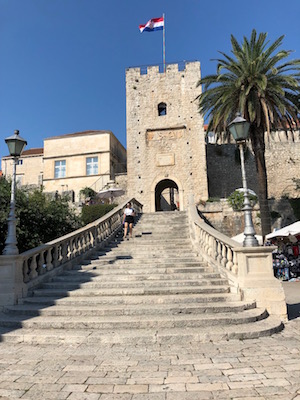 After the fall of Venice, conquerors came and went, since World War I Korcula has been ruled by the Austrian Empire, the Kingdom of Serbs, Croats and Slovenes, Italy, Germany, Yugoslavia and today, the Republic of Croatia, but it’s Venice, whose imprint is here to stay.

Surrounded by sea, mountain, and sky, daily existence today is one of carefree indolence. Walking in the footsteps of people who walked the same cobblestones for more than six centuries inspires a reverence for the town’s history and traditions. An appreciation for the simple life after centuries of conflict and conquest seems its birthright.

Stroll along the seafront promenade, and sharp scents of pine and salt air will greet you. It’s the perfect place to sit all afternoon – the sun warming your shoulders, waves lapping the shore, light breezes blowing off the crystal-clear Adriatic while enjoying grilled fish and the local wine in a total seduction of the senses. La dolce vita, Croatian-style. ~TPM

About Clare Thorne—As far back as she can remember, Clare loved the adventure of travel. In college, she trekked across Europe and spent a summer picking strawberries in England. She has never stopped. Clare’s work is published in numerous travel magazines.