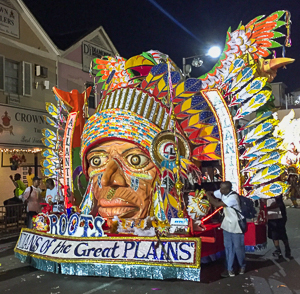 Rush Out signals the start of participants rushing the street to dazzle, entertain, and compete. Prepare to be immersed in Bahamian culture by reveling in dance and musical rhythms. Sounds from goat-skin covered drums, whistles, brass instruments, conch shell blowers, cowbells, and horns pierce the post-midnight, pre-dawn sky. Music is accompanied by a cornucopia of hand-made ornate costumes made of crepe paper, beads, sequins, feathers, cardboard, and more. Masks and non-motorized floats complete the parade. 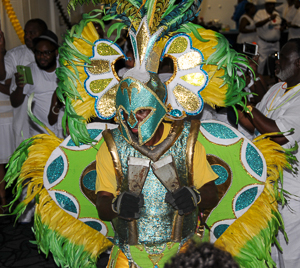 Junkanoo dates to the 18th-century. Consensus as to the origin varies. Beliefs range from being named after West African tribal chief, John Canoe, who came to the West Indies during slavery. Another belief tied to Junkanoo is derived from the French phrase gens inconnus, unknown people. That may explain the masks. Many people feel Junkanoo evolved from the days of slavery when the enslaved were given three days to celebrate; Christmas, Boxing, and New Year’s Day. During this time, singing and dancing paired with colorful masks were celebratory hallmarks. Perhaps aspects of each are incorporated into what is today’s celebration.

Junkanoo is sometimes used interchangeably with Carnival, but there are differences, notably in the origins. Scholars point out that while both are celebrations, Junkanoo’s roots are an African spiritual connection to the ancestral past celebrated at Christmas. Carnival’s roots were introduced as a celebration by Italian Catholics during the Lenten period, which precedes Easter. The roots of Carnival are tied to the Latin derivation Carne, meat, and vale, farewell. The Junkanoo costumes must also be at least 75% hand-made, linking them to the ancestral spirits. All the music is original and performed live. 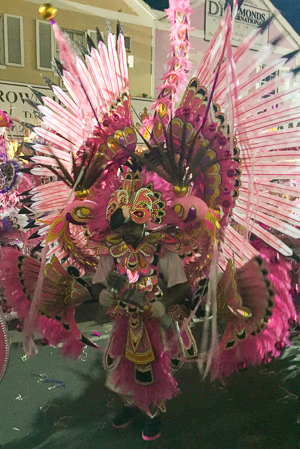 Junkanoo participants comprise troupes, with hundreds to thousands of participants. Members come from all walks of life, including doctors, teachers, bankers, and engineers, to name a few. Troupes compete in categories for theme, costume, music, and choreography performance. Winners receive trophies, cash, and the highly coveted bragging rights.

Some troupes have corporate sponsorships to offset the costs of production. Four of the prominent troupes are Valley Boys, Saxons, One Family, and Roots. Competition among them is fierce, and secrecy is taken as seriously as guarding Fort Knox.

Preparation for the next year’s parade begins right after the last person, and float completes the route on Shirley Street around 10 am. If that isn’t enough, the Boxing Day Parade is entirely different from the New Years’ parade held six short days later. 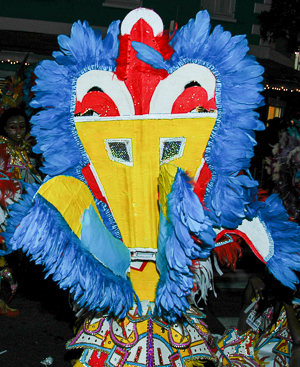 Street viewing is free, or tickets can be purchased for bleacher seating. Depending on the bleacher location, pricing may range from $30 to $100 US. Seating is first come first served. Tickets may be purchased through hotels or by calling 242-325-5267.

Upon departure, many people head straight to the airport from Junkanoo. I was one. Sitting in the airport, head in hand, I could easily spot fellow revelers just by reading their body language – similar to a wet noodle. I lost track of how long I’d been awake after 24-hours passed. No matter the origins of Junkanoo or how you experience it, this celebration is not one to miss. The Bahamian slogan even says so, “It’s better in the Bahamas.” If going in December doesn’t work, summertime Junkanoo is July 10th, their Independence Day. Learn more about Junkanoo and the Bahamas HERE. ~TPM

About Kim Beckley— Kim is a member of ITWPA and a travel writer located in Orlando Florida. She’s a lover of travel, photography, and sharing her adventures in any fashion. Her motto, “The world is a big place, and there’s a finite amount of time to see it.”