Look up. Look waaaay up and take a good look at the faces on clock towers when you travel. Here are a few unique faces you might encounter. 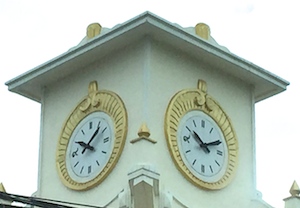 King Bhumibol Adulyadej was the king of Thailand for 60 years. Beloved by the Thai people, they called him King Bhumibol the Great. As the ninth monarch from the Chakri dynasty, he bore the title Rama IX. After he died in October 2016, the Thai people mourned deeply for a year. In respect, many Thais wore the Thai symbol for the number nine pinned on their clothing. Similarly, on this clock tower in Thailand reminiscent of a watchful owl, the plain marker indicating 9 o’clock has been replaced by the Thai symbol for the number nine. 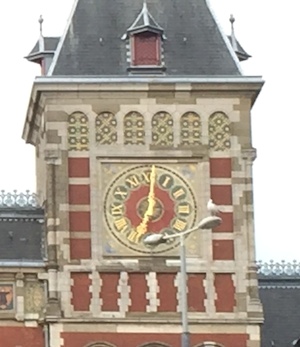 The Amsterdam train station has two symmetrical clock towers. Both have intriguing symbols around the circular faces. On the east tower, you may recognize the Roman numerals for 1 to 12; however, the west tower presents more of a mystery. It indicates wind direction, with the first letter of the Dutch words for north (noorden), east (oosten), south (zuiden), and west (westen).

This unique clock face reminds visitors of the importance of shipping in the history of the Netherlands. When ships sailed the seas, their travel depended on the winds. The train station stands on the waterfront just steps away from the former head offices of several historical maritime businesses. The business people could keep an eye on the winds to see if their cargoes would arrive at the expected time.

Some clock faces don’t require you to strain your neck, but they still merit attention. 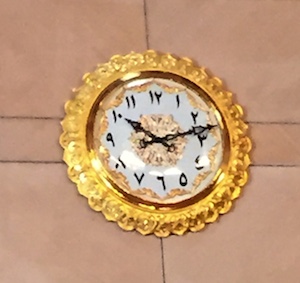 Arabic numerals adorn this clock in the women’s prayer room of a mosque in the United Arab Emirates.

This brilliant gold-faced clock in an ornately carved wooden stand is found in Mani Bhavan, the house where Mahatma Gandhi lived in Mumbai India, between 1917 and 1934. The former home – now the Gandhi Memorial Museum – contains a photo gallery and library of Gandhi’s writing and teachings focused on shaping a more civilized world order based on truth and nonviolence.

In this digital world, you may never have learned how to read a clock face, but we can still appreciate their beauty. Our close observations and curiosity can lead us to discover more about the culture of a country we are visiting.