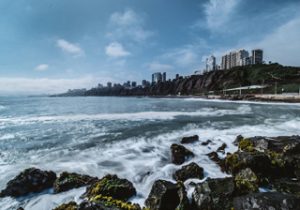 But let’s get things straight. Ceviche is nothing like pizza.

As a coastal country, the fruits of the coast have given rise to the ubiquitous cevicheria eatery. Now, a cevicheria is my kind of place. Ceviche is a kind of quick-pickled fish salad. The fish is not cooked in the traditional sense, but don’t let that scare you off. Ceviche is made from fresh raw fish cured with lemon or lime juice mixed with some chilis. After that, well it’s rather like chili or stew: what happens next has no real rules, and depends on the mood of the chef and the provisions of the kitchen.

The uniqueness of ceviche comes from the personality of its creator and the choices he or she makes. What type of seafood? Onions, salt, cilantro, parsley, mint, mango, tomatoes, bell peppers…. The choices and combinations are endless. And delightful. 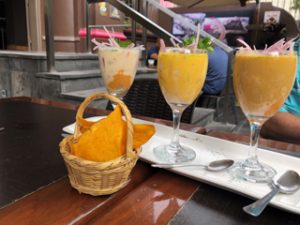 Ceviche is lunch food because the fish is fresh

In Peru, ceviche is considered a national dish, but most central- and south-American countries, and also Mexico, have their own versions. The imperative for good ceviche is fresh fish or seafood. Really fresh. For Peruvians, ceviche is a lunch-time food. That’s when the fish is at its freshest. The early morning catch is the mid-day ceviche.

In Peru, lunchtime is the perfect time to tuck into a little culture and a serving of fresh ceviche.

Throughout Lima, and in the communities we visited, in the Sacred Valley, you’ll find cevicherias on any block that has restaurants or cafes. They’re almost as numerous as chifas, and they’re probably as popular with the locals as pizzerias are in North America!

But maybe you’re not in the mood for fish? Then you can check out a Chifa.

Driving in from the airport, a local was giving us the lay of the land in Lima, Peru. “See those signs for chifas? There are more than 3000 of them in Lima. Peruvians love Chinese food.” Chifas are Chinese restaurants. While I was surprised and amused, I guess that makes sense. Chinese food is popular throughout North America, so why not South America?

Chifa is more than that. It also refers to a whole Chinese-Peruvian cuisine that evolved out of the Peruvian history. Records show a Chinese and Asian population in Peru dating back to the 1600s. Then, in the mid-1800s approximately 100,000 Chinese came to Peru as indentured servants. Over time, these immigrants made their imprint on Peruvian cuisine in the form of chifa. 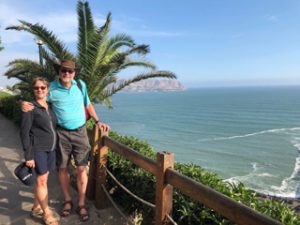 In the neighborhood chifa, you’ll no doubt find lomo saltado, a fusion of the Peruvian and Chinese cultures that have since been adopted as typically Peruvian. You’ll see it highlighted on every sandwich board displayed outside the neighborhood chifa. Lomo saltado can best be described as a stir fry of beef, onions, tomatoes… and French fries! Alpaca meat is sometimes substituted for the beef. Tasty and delicious, you’ll find lomo saltado on many restaurant menus, whether at a chifa or not. It’s definitely worth a taste.

Peru, with its massive biodiversity, culinary creativity, and its unique Spanish/Inca culture, has made this country a foody hotspot. Ceviche and chifa are merely the tip of the culinary iceberg.