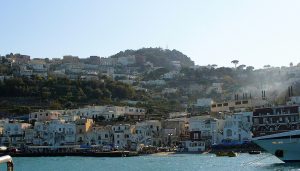 Although initially skeptical, I fell in love at first bite. The sweet and sour combination tantalized my taste buds and made me crave for more. The smell of citrus floated all around this small island, just three miles off the coast of southwest Italy.

Yellow illuminated the view, from both the fruit and the sunshine, immediately transporting me to a “happy place.”

My husband and I strolled the narrow streets and stopped to chat with a local homeowner. As he spoke, he tended to his 20′ x 40′ lot almost entirely consumed by lemon trees. We asked what it was like living in paradise and with a smile as bright as his citrus, he replied: “I wouldn’t live anywhere else in the world.” He truly knows the meaning of the phrase “when life gives you lemons, make lemonade.”

He then directed us to a café, probably owned by a relative. The experience proved to be the most intoxicating of all as we sipped house-made limoncello and listened to the waves lapping against the boulders. 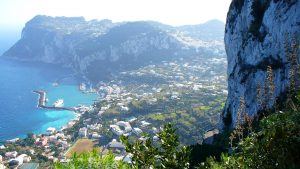 Our next adventure was a 10-passenger bus ride to Anacapri, one of the highest elevations on the island. As we boarded, I glanced up at the limestone cliffs, and they appeared to melt into the clouds. The vehicles driving to the top resembled ants marching in a straight line, ready to fall off the face of the mountain at the touch of a breeze. I felt butterflies in every inch of my body but inhaled deeply and held on tightly to experience the thrill. “I need more limoncello!”

Our seasoned driver hugged the guardrail to make room for oncoming traffic as I hesitantly peered down at the sheer drop into the crystal blue water. He then performed a 180-degree switchback to maneuver the hairpin turn. Another choice to ascend to the top of Anacapri would have been by funicular, but neither is for the faint of heart. Once at the top, the view overlooking the Bay of Naples and shore of Capri was exhilarating.

Next we headed to Villa San Michele where Roman Emperors once ruled. In the 19th century, a Swedish physician named Axel Munthe transformed it into his dream home. A statue of an Egyptian Sphinx stares in the direction of Mount Vesuvius and patrols the sea, while gardens of tulips and cypress trees dance around it. Beyond the garden stands Barbarossa mountain, a sanctuary for migratory birds. Their diversified chirping proves they stop here on their flights between continents.

As we descended to the coastline, our guide pointed to the three famous rock formations jutting up from the sea, called Faraglioni. This translates to stacks in Italian and each one has a name; Stella, Mezzo, and Scopolo. He also educated us on the Blue-tinted lizards that supposedly live on these rocks and nowhere else. 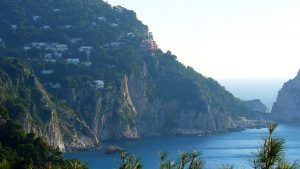 When we reached Marina Grande, we boarded our ferry back to Sorrento. Many other vessels bobbed and drifted about as we waited to sail. Multi-colored bungalows dotted the coast in all levels of elevation, and the smell of salt filled the air. As I reached for my camera, I realized I was wearing Capri pants. How appropriate! This fashion staple was designed by Sonja de Lennert in 1948 and was very popular on this island in the late 1950s and ‘60s—hence the name.

If you go, stay in Sorrento and take the ferry from there. Allow extra days to explore other cliff towns along the Amalfi Coast, including Positano, Ravello, and of course Amalfi. Then venture off to the excavated city of Pompeii.