Stepping into the small room from snowy Colorado felt like we were suddenly in a small pub in England instead of Olde Town Arvada. The wood room was darkly stained, and lined with bar stools against the windows. Our kids quickly ran to the bar stools and chose their seats. My husband went up to the window and grabbed a couple menus. We had just found the site of “the best fish and chips this side of London,” according to the young man at the counter.

And the fish was good, no doubt about it. The batter was golden and crispy, and the fish was cooked to perfection. To add to its authenticity, it was served on “newspaper” in a basket, just like it was served in England years ago. We also sampled the sausage rolls, since they are impossible to find outside the UK. Again, the pastry was light and flaky, and the sausage meat was distinctly British sausage — not the American/Italian spicy sausage. 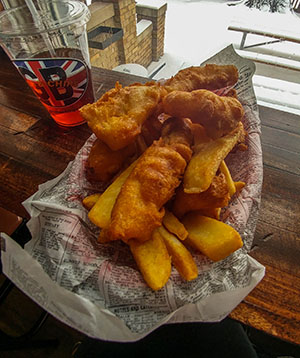 GB’s Fish and Chips, a small family-owned chain of four restaurants, opened its doors in 2007 because the owner couldn’t find decent fish and chips in the Denver area. They have since expanded their selection to include hand-stuffed “bangers,” real English sausages, shepherd’s pie, and a selection of meat pies and pasties, all of which are made from scratch, in-house.

Prices at GB’s are affordable for fish in Denver. $10 will buy you a half of just fish. For $3 more, you can make it a half meal. They also offer a small selection of kids’ meals for $6. Kids eat free on Sundays.

GB’s can be found in four locations across the Denver metro area.

The Arvada location has two rooms for dining, and additional seating outside when weather permits. They also have a children’s play area outside. They have arranged with the bank next door to offer parking after 5 p.m. on weeknights and during the day on Saturdays and Sundays.