After a long flight to Belize City and a cramped water taxi ride to the island of Ambergris Caye, my daughter and I were tired and ravenous. We asked our Airbnb hosts for some restaurant recommendations and they offered to drive us on their golf cart to one of their favorite restaurants. We love to try new and different foods, and we were expecting to drive to one of the oceanfront dining spots for an authentic Belizean meal; instead our host pulled up in front of a little backstreet restaurant called Pupuseria Salvadoreno, pointed, and enthusiastically exclaimed, “You’ve got to try pupusas!”

Now being of Ukrainian heritage, I thought I heard her say kapusta, which is the Ukrainian word for cabbage, and quite coincidentally, on the table were jars of what appeared to be coleslaw. For a fleeting moment I thought, “Really? What on earth could be so special about coleslaw in a jar?” 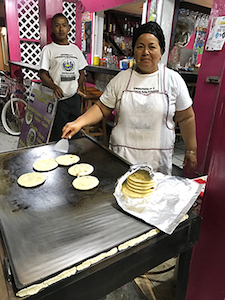 “Pupusas,” she repeated, and pointed in the direction of a woman standing just at the entrance of the restaurant next to an outdoor griddle grabbing handfuls of dough from a large bowl, patting them flat, and slapping them on the griddle.

I have to admit, we weren’t too impressed. After all, we had envisioned an authentic Belizean meal by the water and instead we found ourselves at this little nondescript restaurant on a narrow street facing an empty lot. However, being the adventurous foodies that we are and not wanting to seem ungrateful, we graciously accepted their recommendation and took a seat in the restaurant.

My first concern was whether my daughter would even be able to eat these pupusas, since she has celiac disease and can’t eat anything that has gluten. I called the waiter over and asked him what pupusas are made from.

“Really? You mean no wheat flour?”

Yippee! Finding gluten-free food is often a challenge for my daughter so this discovery was a definite score!

Pupusas are essentially thick corn tortillas stuffed with a variety of fillings, grilled on a flat griddle, and traditionally served with a thin tomato sauce and curtido, a pickled cabbage (the mystery coleslaw in the jar) that is similar to sauerkraut. Pupusas were created centuries ago by the Pipil tribe of El Salvador, though there has been some dispute with Honduras to this claim. Pupusa griddles, called comals, have been found in archaeological digs in El Salvador dating back almost 2,000 years ago. In 2005, the Salvadorian Legislative Assembly declared the pupusa the national dish of El Salvador. 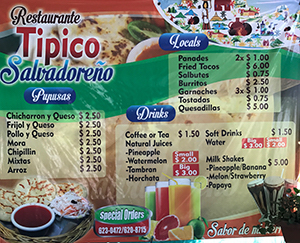 Pupuseria Salvadoreno offers many different fillings including beans, cheese, pork, spinach, pumpkin, and mixed. Our pupusas arrived at our table hot off the griddle and oozing with cheese, and the first bite elicited simultaneous groans of delight from both of us. We tried the pork, spinach, and mixed, and while we loved them all, our favorite was the mixed.

Pupusas are surprisingly filling, and after devouring one we each ordered a second one and found we could barely finish it. For the budget conscious traveler, another bonus is the price — at $2.50 Belizean ($1.25) each, pupusas are an extremely inexpensive meal or snack, and since they’re filling they go a long way. They’re also an easy takeaway meal, and while we were there a steady stream of people stopped for takeout pupusas wrapped in foil.

After our visit to Pupuseria Salvadoreno in San Pedro, we were on a mission to find more pupusas, and to our delight we found another pupuseria within walking distance of our next Airbnb in San Ignacio in the Cayo region of Belize. Restaurante Tipico Salvadoreno’s pupusas were equally delicious and after devouring more of these little stuffed delights, my daughter and I agreed we were officially in love with pupusas!