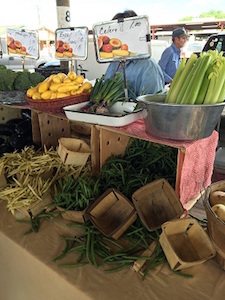 The Market, as we kids called it, has been in existence as long as I can remember. Looking through the eyes of youth, it seemed huge, with lots of sheds and tables and vendors. As I grew into adulthood, I began to realize what an important role the Market played in the lives of so many, especially the farmers who were its mainstays.

In the 1800s citrus groves dotted the central Florida landscape, stretching in all directions as far as the eye could see. Then, in 1894, a hard freeze destroyed or damaged most of the citrus crops. Farmers then began to grow and harvest other kinds of produce. Peppers, cucumbers, lettuce, beans, and cabbage became staple crops. Buyers, however, were not always willing to pay the asking price and instead would pay what they wanted. This caused much distress for the farmers, as they did not know from one day to the next if their crops would be sold or would have to be disposed of. Auctions were held in an effort to remedy the problem, but after several days of auctions the farmers realized that something else was needed. By joining forces they could help each other. That was the thinking that motivated the farmers to take action and build the market. The first sheds were built with cypress wood from the surrounding swamps and mules were used to drag out the timbers. Many farmers pitched in to help with the building. Thus began what is now known as the Sumter County Farmers Market, the oldest and largest flea market in the state of Florida, established in 1937, and born from the need to survive. 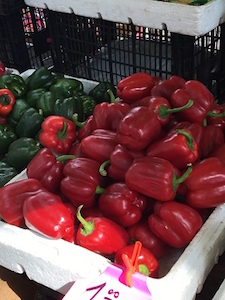 I can still hear the bell that would ring to signal to all vendors that the Market was open for business. Today, there is no longer a bell that rings, but the Market has remained relatively unchanged over the years. Many of the Market’s founders are still selling farm fresh produce, locally grown on family farms.

For more than 50 years the Market has been open on Mondays only. While some may dread Monday as the beginning of the work week, that’s not the case with the many retirees from neighboring communities that visit the Market on a weekly basis. For one day each week, the population of the city of Webster swells, especially during the months of October to April when the state’s famous “snowbirds” are in abundance, eager to experience this large piece of Florida history. 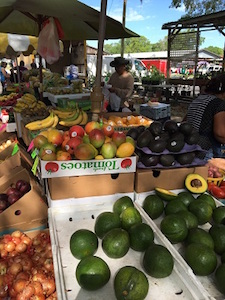 The Sumter County Farmers Market is located in the heart of Florida and sits on more than 40 acres. It has approximately 1,500 vendors selling arts and crafts, jewelry, furniture, clothing, antiques, tools, lots of food — and produce, of course. There are no admission fees or fees for parking on the Market grounds. Several privately owned parking areas that charge nominal fees are within walking distance.

Bring your walking shoes and bargaining skills, and be prepared to take lots of good stuff home from one of Florida’s Top 10 Tourist Attractions!