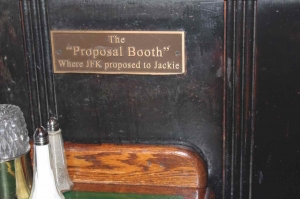 Walking into Martin’s Tavern is like taking a trip through time. While equestrian paintings are the prominent artwork on display, don’t be fooled into thinking this is a horse-themed restaurant. The original owner, Billy (William S. Martin), was a pro basketball, football, and baseball star who opened this Georgetown watering hole in 1933. Billy was on the 1914 Boston Braves team that won the World Series. His humble tavern has been a favorite of locals and several of our nation’s presidents, albeit before they were elected to the nation’s highest office.

The booths in Martin’s have seen many a famous politician dine and drink here. Every president from Harry S. Truman to George W. Bush has frequented this tavern on the corner of Wisconsin and N Streets. If you are lucky you could be seated in the booth where young John F. Kennedy proposed to Jackie. Booth #24 is where Lyndon B. Johnson dined with his mentor when he was the Senate Majority Leader. You might even get to sit at booth #2 where I ate last week — the Nixon Booth.

Whichever booth or table you get be ready to enjoy some seriously good “old school” food. Shepherd’s Pie made with ground lamb and vegetables and topped with mashed potatoes is one of my favorites. Grandma Martin’s Meatloaf is as good as it gets served with garlic mashed potatoes and broccolini. Their oyster stew is rich but not too full of heavy cream like some. You can actually taste the oysters in this version. Other “old school” favorites include pot roast, Welsh Rarebit, and Fried Green Tomatoes. 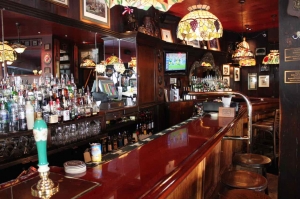 On a recent brunch visit my mother-in-law had pancakes that were some of the best I have ever had at a restaurant. The chef mixes egg whites in them, making for a fluffy pancake that has a hint of campfire roasted marshmallow flavor. My father-in-law had the meatloaf we all agreed was one of the best ever. Their meatloaf is light and full of beef flavor with rich brown gravy accenting it and the garlic mashed potatoes.

For modern dishes try the Triple Play Sliders, Potato Skins, or a Bison Burger for lunch. Their soups and salads are worth a try. On our recent visit we tried the New England clam chowder and French Onion Soup. The clam chowder was not too thick, but still creamy enough, and chock full of clams with just a hint of herbs and garlic. I had the onion soup and enjoyed the deep brown broth hiding below a disc of melted cheese and toasted baguette.

In the restaurant business it’s rare to succeed for 10 years, let alone 82. Currently owned and operated by Billy Martin, Jr., this tavern is in good hands and will be around for years to come. I love how they made us feel like locals each of the four times we visited from Baltimore. Give it a try yourself to enjoy one of Washington, D.C.’s best taverns.