On the creaky second floor there are fewer writings and etchings than on the first floor, but they are still clustered in certain places where the plaster has not broken off from the old wood. Many of the names were written over a hundred years ago. However, at the base of a grandiose door frame, carved rather haphazardly in bold letters, an etching reads: “Charlie Manson & Family — 1969”. It is hardly what one would expect to find in a ghost town, yet it has been interwoven into the long and interesting history of Nye County, Nevada. 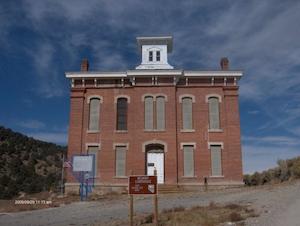 It is not my first time to the diminishing town of Belmont, but it is the first time inside the courthouse, courtesy of Eric Johnson of the Nevada Parks Division. Usually, nobody is on site, and most visitors to this desolate town don’t get to peer inside, let alone stroll through. Luck has graced this most recent visit, though, as a ranger truck is parked on the hill where the courthouse stands. I am allowed to enter the dark mystery therein with a warm smile from Eric. There has been an ongoing restoration effort, but the only immediate evidence of this is reinforced floorboards so that one will not get an express tour of the basement. The ground floor is a maze of rooms which were the clerk’s office, the Sheriff’s office, and all the other necessary workplaces, their high door frames and the remaining plaster filled with graffiti. “If the writing is more than 50 years old it is considered historical,” Eric explains.

Built in 1876, this two-story red brick courthouse of Italianate architecture honored Belmont as the Nye County seat until 1905 when the town was largely abandoned. The latest silver boom then was in nearby Tonopah, and after most of the population headed that way, so did the county seat. This imposing structure stood vacant and neglected clear into the 1970s when the state took possession. During those 70 years of desertion many an owl, varmint, and squatter called it home. Although the courthouse is state park property, the crumbling leftovers of Belmont below are situated mostly on private property. Amazingly, a paved road leads the way here, as opposed to the endless four-wheeling over rocks, sand, and sage that it takes to get to many ghost towns.

The stairway up to the courtroom has long lost its bannister and seemingly slopes toward collapse. One must hug the wall for safety while climbing. The courtroom itself is empty and ominous with only an old, broken woodstove for occupancy. This remnant of proceedings past is silent and vast, hushed in anticipation, as if awaiting a verdict. On the far side of the courtroom is a small door leading to the outside. This was where the guilty were led through, either down to the jail cells behind the courthouse, or to the gallows. As for Charlie and the family, I am told their stay was brief. The town’s sole resident at the time, an old woman, chased them off with a shotgun, making them but an odd occurrence in the historical aftermath of this stately building.

Belmont is 67 miles north of Tonopah on State Route 377. Be advised the elevation is 7,000 feet and often not accessible in the winter months due to heavy snow. Before visiting be sure to call the Nevada Division of State Parks at (775) 867-3001 to inquire about the best time for the rare and privileged experience of touring the inside of the Belmont Courthouse.