Take a break from theme-inspired restaurants and hotel coffee houses in and around Disneyland and escape to a "real" breakfast. 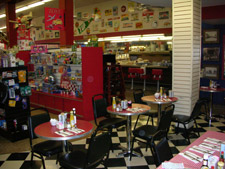 Fifteen minutes from the “Happiest Place on Earth,” with its ersatz Matterhorn and crowds of mouse-eared little people on sugar highs, is a throwback to the California of the 1950s, Old Towne Orange.

Complete with a verdant circular central plaza that Disney himself would envy, the heart of the city recalls a languid, less frenzied past.  The plaza, where North Glassel Street and Chapman Avenue intersect, is surrounded by lovingly restored late 19th-century storefronts and stone buildings. Charming shops and cafes radiate from the plaza in all four directions.

Soft early morning sunshine had already warmed the eucalyptus-scented air as we reached our primary target, Watson’s Drug Store and Soda Fountain, one block off the plaza.  Minutes after my companion remarked, “It looks like a movie set!” we discovered a plaque mounted on a stucco wall documenting its role in several films, including “The Stepford Children” and “Gumball Rally.”

Touted as “the oldest drug store in Orange County,” Watson’s is also the oldest continuously operating business in the City of Orange.  The family operation has expanded several times since its inception in 1899 and now occupies nearly the entire block.

An ancient Wurlitzer in amazingly good operating condition provides a telling first impression.  Propped up in front of a carousel of original 45 records is a folded note warning patrons to “Put quarters in slowly, or they’ll get stuck.”  It’s a metaphor that could sum up the pace of everything in Old Towne Orange.

Watson’s obliterates the notion of specialization — it’s a drug store AND a diner.  It manages to do both well.  Several cushy red leather booths provide patrons a picture window view of Chapman Street and a glimpse of the plaza.  Half a dozen four-tops with red and white checkered tablecloths are arrayed near the long soda fountain counter.

Within close reach are three aisles of toothpaste, postcards, beachwear, candy and a zillion other typical drug store wares.  A display of old pharmacy paraphernalia is displayed on a shelf just below the ceiling behind the check out counter. It’s a drug store, a diner, AND a museum.

But breakfast was our objective and we were not disappointed. The “Country Breakfast” included two eggs, sausage or ham, enormous freshly baked buttermilk biscuits with homemade cream gravy, and a crisp mound of home fries.  The airy pancakes almost levitated from the plate.  Fresh sprouts, sunflower seeds, and avocados gave the menu a Southern California flair.

What’s “SOB?” I asked our waitress. Smiling sweetly she said, “It’s the same as SOS, only with biscuits.” For those without military service, “SOS” is a popular acronym for creamed chipped beef on toast. You don’t find that everywhere.

Too late for breakfast? Try the nearby Citrus City Grill for upscale California Coastal cuisine.  Built in 1886 as a hardware store, it was the second brick structure in the city.  A Zagat Award winner for the past five years, Citrus City’s lunch and dinner menus include salads, oven baked fired pizzas, pasta dishes, and a variety of grilled meats, served in a breezy, chic environment. The wine list is impressive.  (Citrus City Grill, 122 N. Glassell, Orange, CA, tel: (714) 609-9600).