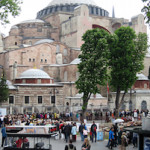 By Ann Jamieson An icon of Istanbul, the Hagia Sophia (Holy Wisdom) combines famed architecture and art with an atmosphere of intense spirituality. Built by Emperor Justinian as a cathedral, the Hagia Sophia was converted into an imperial mosque by the Ottoman Empire in 1453, and in 1935 under Mustafa Attaturk’s orders became a museum. The UNESCO World Heritage site is one … END_OF_DOCUMENT_TOKEN_TO_BE_REPLACED 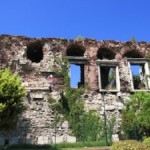 Seraglio Point in Istanbul is dominated by the magnificent, sprawling structures of two of the world’s architectural masterpieces. These are Haghia Sophia, the Byzantine Church of the Holy Wisdom, and the Ottoman Blue Mosque or Sultanahmet Camii. They’re like prize fighters sizing one another up across the park that separates them, champions of two great civilizations and the … END_OF_DOCUMENT_TOKEN_TO_BE_REPLACED