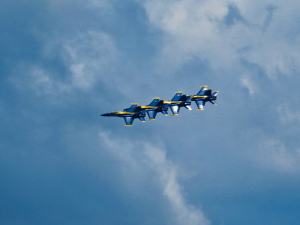 Tick tock, tick tock, the minute hand swept ever so closely to the bewitching hour of ten o’clock. At the appointed time, the gate swung open, and the crowd rushed through to find the best viewing spot. Why was there such a huge crowd? What did they expect to do? What did they hope to see? They were there to watch one of the world’s premier flight demonstration team shock and awe them with their skills of flight.

“They came to Sherman Field at The Western Gate to the Sunshine State,” as former Mayor Vince Whibbs would say. Pensacola is home of the Navy’s premier flight demonstration team, the Blue Angels and the National Museum of Naval Aviation. Located at NAS Pensacola on Escambia Bay, the Blue Angels can usually be found practicing their aerial maneuvers in the sky above the air station twice a week between March and November. 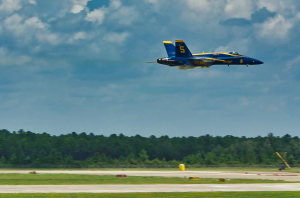 One has just got to love the smell of jet fuel in the morning to watch these bad boys perform. The pilots consist of five Naval officers and one Marine, all with several thousand hours of flight time in the F-18 Hornet. However, this unique naval squadron would not be what it is without the support of the entire ground team.

Twice a year the Blues put on a formal performance for the hometown crowd and visitors. During July, Pensacola Beach draws thousands to enjoy aerial maneuvers, swim in the 85-degree water of the emerald green waters of the Gulf and build sandcastles in the white sugar sand. 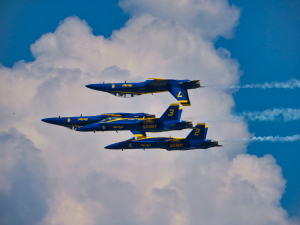 A second show occurs in November at NAS Pensacola. The full-blown airshow has various types of aircraft from different aviation organizations. Acrobatic pilots from around the world perform their stunts. Blue Angel pilots let it be known they are not acrobatic pilots. They perform the same maneuvers all Navy and Marine Corps pilots do; they just do it closer. How close might you ask? How about 18-inches wingtip to wingtip.

One need not wait for these two formal shows to watch the Blues fly. On Tuesdays and Wednesdays, the public is invited to watch them practice from the flight line behind the Naval Aviation Museum. Bring your own chair, sit on the bleachers, rent a chair, or just sit on the grassy knoll to watch their 40-minute practice show. 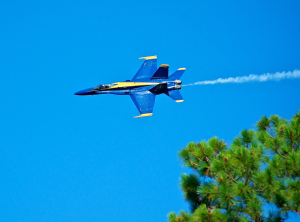 There are two entrances to NAS Pensacola, the eastern gate on Navy Boulevard and the western gate on Blue Angel Parkway. Visitors without a military/government ID are required to enter through the western gate. Everyone aged 18 or over, will be asked to show a government-issued picture ID such as a driver’s license, state-issued ID card, passport, etc. Visitors who attempt to enter the eastern gate without the military type ID will be turned away and sent to the western gate. Those carrying a large purse or backpack will have them inspected at that time. Be sure to bring water, especially during the summer months when the heat index on the flight line can reach 5-15 degrees north of 100.

Practice time starts at about 11:30 with the gate to the flight line opening at 10:00. Visitors begin to line-up at the flight line gate shortly before 9:00. Practice shows can usually find 5,000 – 7,000 visitors anxious to watch the Blues aerial dance in the sky. 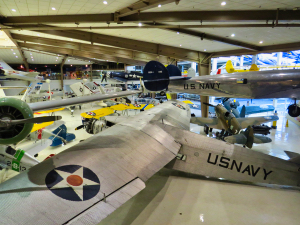 After the show, walk to the museum and spend a couple of hours learning about naval aviation and its history. Have lunch in the Cubi Bar, brought intact from the Philippines. You can watch a film in the digital movie theater, or if you dare, fly an F-18 simulator that you control. On Wednesdays, after the pilots have parked their planes, they come to the museum to sign autographs in the Blue Angel Atrium.

Now go have some fun and enjoy what the Blue Angels and National Museum of Naval Aviation have to offer – you won’t be disappointed. Learn more about the Blue Angel HERE.