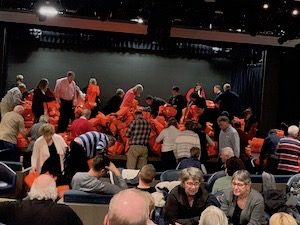 When Elsa and Debby boarded the Viking Sky, they met as two strangers, both travel writers, eager for the upcoming adventure: In Search of the Northern Lights. Twelve days later, they left as two friends, survivors of an epic sea drama that could have cost them their lives.

The country of Norway had always intrigued Elsa, mainly because, as a music teacher, she loved the composer Edvard Grieg’s piano music, especially The Wedding at Troldhaugen. So, she booked a cabin and posted a message on Facebook looking for a companion. Debby, a lifelong traveler, professional writer, and stock photographer, immediately responded. She had for years wanted to see and photograph the Northern Lights but had never been offered the chance before.

During the cruise, Elsa did attend a lovely piano recital in the concert hall overlooking the lake and the garden studio at Troldhaugen where Grieg composed his music. Debby spent her time having her own adventures: taking photographs while enjoying unique Norway experiences including a helicopter ride, husky dog sledding, visiting the Igloo Ice Hotel by snowmobile, riding a RIB boat, visiting the wildlife at Polar Park and searching for the Northern Lights on a ski slope at midnight.

Onboard they both enjoyed the various arts and sciences lectures, the choice movie viewing, the musical performances, and live shows, the eat-when-you’re-hungry dining, and the Norwegian specialty meals. Elsa also opted for the Nordic Bathing experience that included a rejuvenating massage and facial, a hot sauna alternating with sitting in a snow cave and being gently whipped with a birch branch!

On their very first night at sea, departing from Bergen, there was great excitement when the cruise director announced that the Northern lights had been sighted. As it turned out, the lights were making an appearance right outside their cabin. Soon they were grabbing coats and bailing out through the glass door onto the balcony for their own “private” Northern Lights extravaganza. Elsa got fabulous photos using only her cell photo camera, and Debby was able to use her professional gear with a tripod set up on the table. Watching their first Northern Lights from the comfort of their balcony chairs in their pajamas and coats  – what an adventure. 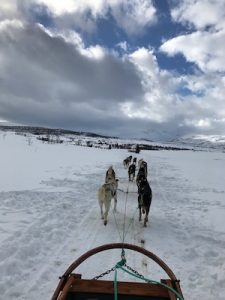 On the return journey, on the tenth day of the cruise, the captain could not dock in Bodo because the sea was getting very rough and the port was too narrow. The ship continued, heading for Stavanger when disaster struck. Elsa was in her cabin videotaping the giant waves and huge swells when a voice announced the code echo alarm, causing her to put on her shoes and jacket, grab her bag with passport, credit cards, and cellphone, and join the line of passengers being escorted to their designated muster points. The ship was rocking precariously while sounds of things breaking could be heard at periodic intervals. Not wanting to run out of battery power and unable to take photos, she also grabbed her charger.

Debby had been watching a movie in the ship theater. When the onboard emergency signal went out, she was already at her muster station. In previous years, Debby had been a police officer, volunteer firefighter, and paramedic. She quickly introduced herself to the crew and began to assist as needed, moving guests to more secure seating, and directing a few guests to more definitive medical care as necessary. When Elsa arrived at the theater, Debby’s mind was put at ease. She was able to reconnect with her cabin mate. Lifejackets were brought in and put on while most guests remained remarkably calm and considerate of each other.

Elsa was sitting, tightly squeezed into the rows of passengers. Apparently, all four engines had been cut, and two anchors were holding the ship at bay. They were not aware of how close they were to the rocky shores of the notorious Hustadvika. It was disconcerting to hear that passengers would be airlifted by helicopters.

Pondering the situation, Elsa thought it a good idea to take a selfie in her life jacket and together with a short note of events, mail it to her children. Amazingly, the ship kept Wi-Fi contact with the outside world. 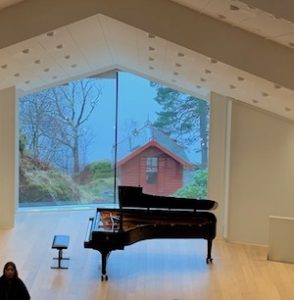 Debby, along with a few other guest volunteers, were busy getting dry clothing to those who were soaked by the cold water at the other muster station. She and Elsa would later view shocking video footage of the B Muster station where a door was blown-in sending waves crashing over passengers. Footage showed passengers and furniture flying across the floor while panels fell from the ceiling onto seated guests.

All the while, the ship was still being tossed about, and sounds of crashing furniture and glassware could be heard. Soon after the kitchen staff had cleaned up the damage and brought a few snacks.

It was a relief when finally, three engines were restored, and the ship regained some stability. The reality of their predicament would hit them when, at regular intervals, lines of ten to twelve people holding onto each other’s lifejackets, were marched past on their way to being airlifted. It was difficult to catch any sleep sitting up in lifejackets. By mid-morning the following day after about 22-hours, about 500-passengers had been transported to safety, and about 450 plus crew remained onboard.

Two tugboats were eventually roped to the ship, and they could proceed to Molde, the nearest port. The captain was soon able to make an appearance in the theater and to great applause, gave a short speech and shook hands all around, even stopping briefly for photos as requested. The entire staff had been nothing but very attentive and patient in a stressful situation. 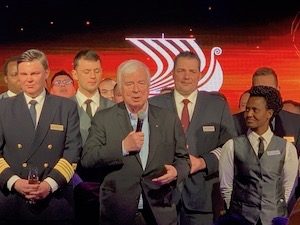 The crew continued their hard work during the 3.5-hour trip into Molde, cleaning the debris, enabling guests to return to their cabins to enjoy dinner. Unfortunately, Debby would miss the show scheduled for that evening when her travel plans home was rearranged for her by the Viking staff. With 10-minutes to get down to the dock, Elsa and Debby threw things together and said goodbye.

It was quite a jolt to be suddenly all alone, but Elsa still went to the theater that night. It was an eerie feeling, seeing the lifejackets stacked next to the stage. However, there was a festive air as champagne was passed around, and the owner of the Viking fleet and the Captain welcomed the remaining passengers. Hats off to the four entertainers, band and crew who presented a final Beatles extravaganza on stage, celebrating the triumph at sea after themselves having helped the shipboard guests for the previous 32 hours.

What happened to cause power failure? Apparently, due to acceptable oil levels being unduly disturbed by the turbulent conditions, the engines were automatically switched off. Plans are being reviewed to correct this situation in the future.

Subsequently, Debby and Elsa have each, in her own way, found an outlet for her emotions, mostly by writing about it. Throughout the ordeal at sea and after that, the Viking crew and management have been professional and supportive. Guests received full refunds, bouquets of flowers. Debby and Elsa are ready for their next adventure and have accepted Viking’s generous offer for a tour of the East, setting sail on the Viking Emerald in June 2020.