Just outside the back gate of the Forbidden City and across the street, we found another example of China’s history, with a family living on a “Hutong” street. Hutongs housed the majority of the Beijing population for centuries before the tremendous economic growth of China over the last 25 years or so.

What is a Hutong? It is really what we in America would call an alleyway, lined by small one-story structures with beautiful courtyards and gardens that once housed a single family. Today, many different families live in the same structure, each occupying a space the size of a single room or two. Even today, many of the Hutongs do not have internal plumbing and must rely on outside communal toilets and baths. 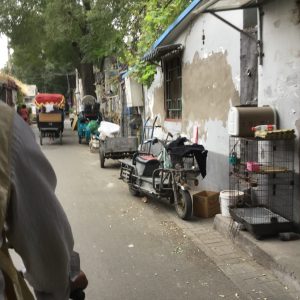 Hundreds and hundreds of high-rise apartment and commercial buildings now populate Beijing, stretching on for miles in every direction. This seemingly endless supply of apartment buildings was built to accommodate the new China and is quickly replacing the remaining Hutong neighborhoods. Over 20 million people now live in the capital city of Beijing.

Modern Beijing, along with the other top tier cities throughout China, houses the fortunate urban permit holders who drive the economic growth of China starkly forward. Most all of these buildings are owned by the central government, along with new subways, airports, and boulevards that dominate the landscape. Structures built for the 2008 Summer Olympics held in Beijng and seen on TV — like the Bird Cage and the Cube — are prime examples of China’s new face. 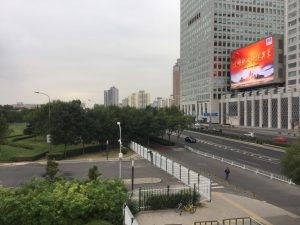 It is easy to forget China is still a Communist country run by a one-party system. There are approximately 90 million Communists (out of 1.3 billion people) controlling the State, the People’s Liberation Army (PLA), and life in general. A massive picture of Mao still hangs overlooking Tiananmen Square. Mao is also pictured on the Chinese currency, the yuan. Despite the Great Leap Forward and Cultural Revolution programs that supposedly caused millions of his own people to starve, Mao is still held in unexpectedly high regard.

Our tour guide was guarded as we followed her around Tiananmen Square before entering the Forbidden City. We listened to her speak of the “1989 incident,” masking our questions about the iconic picture of the Chinese student standing in front of the Army tank during the conflict with the PLA in 1989. No one knows or will say how many Chinese students were killed across China during those days of student unrest.

The economic success of China has overshadowed the Communists’ one-party rule. The urbanites are getting rich fast, and one might hypothesize that Capitalism has saved Communism. Will a political transition be in China’s future?

Of course no trip to China would be complete without a visit to the Great Wall of China, a four-thousand-mile structure built over the last 2,000 years or so, started during the Quin Dynasty.

Our tour group visited the Badaling section of the wall, an hour or so north of Beijing by bus. This section is where President Nixon first visited during his historic trip to meet Mao in 1972, and where the signature photo of the Great Wall is often taken. 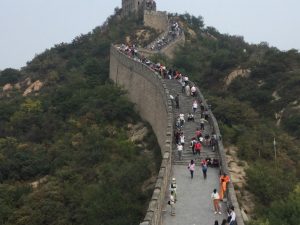 The steps to climb to the top of the wall are steep, numerous, and exhausting for our age group, and like Tiananmen Square saturated with Chinese and Western tourists. Interestingly, each tower built on top of the wall is two bow shots from the other, so that archers with bows and arrows could defend all ground in between. The other curious thing is that the wall follows a winding path so demons and spirits cannot follow, since, we were told, they can only go in straight lines.

Other tour stops in Beijing were the Temple of Heaven, the Summer Palace of the Emperors (including a huge boat made out of solid marble), a local kung fu school, and the Sacred Way to the Ming Dynasty tombs. All were places that caused us to ponder the long history of China, one that stretches over several millenniums.

To complete our bucket list items, we also attended the Peking Opera and ate Peking duck. Now I think I have been properly introduced to this vast land once called the Middle Kingdom by the emperors.