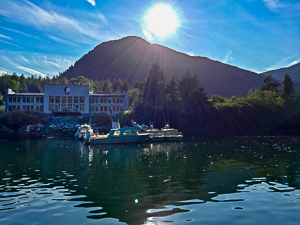 The intercom squawked our impending arrival as we waited in the belly of the huge ferry. The fight between the groaning engines and the strong current gradually subsided and massive doors opened to reveal bright sunshine. A welcoming totem from the First Nations People affirmed our arrival in Klemtu, a small island among many in the Great Bear Rain Forest of British Columbia. As my husband and I disembarked, luggage in tow, Andrew, assistant manager of the Spirit Bear Lodge (SBL), quickly spotted us, shook our hands, and loaded our gear into the back of the truck. Within five minutes we were at the front door of the comfortable ecolodge, our home for the next five days. Tim McGrady, official host and manager of SBL, greeted us with a tour which revealed spacious accommodations, both in the common rooms and in the private bedrooms. Each room displayed huge windows facing the water with a full view of the dock below where we would gather each morning for our daily excursion into the pristine territory of the Great Bear Rain Forest — a vast area uninhabited except for the wild animals which live there.

Excited, we unpacked and waited for the adventure to begin. 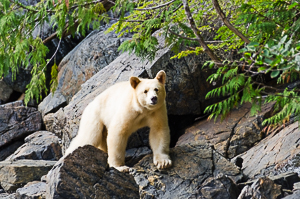 As the dinner hour neared and the water taxis returned their charges to the lodge, news of a Spirit Bear sighting was soon the topic of conversation. The lucky guests were all atwitter with details of their good fortune at seeing a Spirit Bear for the first time this year. The custom each evening after dinner is to review each group’s exploits of the day; then plans are made for the following day’s quest. Small groups accompanied by two guides venture out to their daily destination via a water taxi, captained by a First Nation elder, in search of black bears, grizzly bears, and, hopefully, the elusive Spirit Bear.

The Spirit Bear, also known as the Kermode bear, is a relatively rare creature found only within the Great Bear Rain Forest. The animal is actually a black bear born with a creamy white coat, the result of a mutant gene. About one in 10 cubs is born with this unique characteristic. SBL does not guarantee a Spirit Bear sighting, a rare find, but the guides work diligently to find the animals. Being a bit bear crazy, news of this recent sighting encouraged our hope that we would be among the next assembly to witness the magical white bear.

Like kids before Christmas day, my husband and I could hardly sleep in our beds as visions of white bears danced in our heads. Up early the next morning, we eagerly consumed a hearty breakfast, grabbed our lunch bags, and met our water taxi captain and guides at the dock. After a safety briefing, we were on our way with fingers crossed for a lucky day.

Upon arriving at one of the many islands within the Great Bear Rain Forest, we unloaded our backpacks and scrambled onto the rocks where the bear had mystically appeared the day before. It has been said that patience is a virtue. After we sat among the boulders for about an hour, a speck of white came out of the forest and began moving towards us. Could this be the Spirit Bear or were our eyes and wishful thinking deceiving us? Slowly, nonchalantly, the apparition continued on its journey around the C-shaped cove in our direction. As we whispered excitedly, our binoculars and zoom lens confirmed its identity. In what seemed like an everlasting eternity, the beautiful, cream-coated bear finally presented within photographic range. As he gained proximity, camera shutters began their incessant clicking. The bear seemed unfazed by us or by our cameras as he meandered on his path hunting for breakfast morsels. 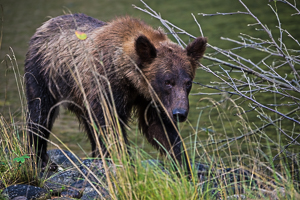 When his eyes finally locked onto ours, his expression was one of friendliness and curiosity. Never showing any signs of fear or aggression, he continued his approach, seemingly intent upon joining our little party. Our guide, for the betterment of the beast lest he become too friendly with man, tapped on a plastic case and in low tones, encouraged the bear to keep a safe distance. I will never forget the somber expression in those amber eyes as the bear realized he was not welcome in our circle. Slowly, he turned and made his way back into the forest from which he had come. We were all sad to see this gorgeous animal leave us, but at the same time we were filled with inspiration that this bear lives and thrives in his habitat without the fear of humans.

Our days at the lodge were filled with the excitement of seeing black bears and grizzly bears in their natural environment as well as the Kermode bear. Hiking among the enormous, ancient forests and floating down the crystal-clear rivers revealed breathtaking scenery as eagles soared overhead. Opportunities also exist for kayaking, whale watching (we had one fishing right outside our bedroom window), and viewing ancient petroglyphs.

Best time to go: When the bears are fishing in the rivers during the fall salmon migration, which is generally late August into October.

How to get there: Islands in the Great Bear Rain Forest are accessible only by float plane or ferry.

Where to stay: Spirit Bear Lodge (http://www.spiritbear.com), an ecolodge founded by the Kitasoo/Xai’xais First Nations People to support and sustain their community, culture, and resources. Lodging includes three delicious meals per day with complimentary wine and beer in the evening.