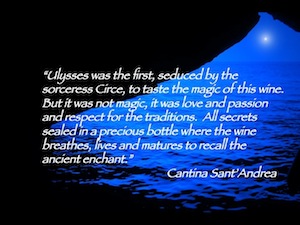 Did you know that Homer’s enchanting sorceress Circe from The Odyssey continues to cast her intoxicating spell far and wide? She does so through award-winning wines and spirits harvested from reclaimed marshlands in Italy’s Lazio region by the venerable Cantina Sant’Andrea — a family of vintners that weathered a real-life odyssey to rival that of Ulysses.

In The Odyssey, following the Trojan War, Ulysses, the King of Ithaca, and his men set sail for home. During the circuitous voyage, they follow the winds up the Tyrrhenian Sea and reach the island of Aeaea. Here, they encounter Circe, fall under her spell, turn into pigs then back again, stay a year, then set sail again for Ithaca. Anyway, according to ancient Roman historians, it turns out Aeaea was not an island at all, but rather Capo di Circeo, a small peninsular coastline in the Lazio less than 60 miles from Rome. 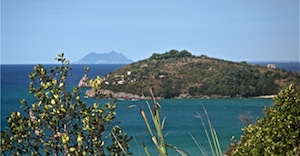 Now, let’s fast-forward to mid-19th century Pantelleria — an island in the Mediterranean Sea within spitting distance of Sicily to the southwest and Tunisia due east. Here, the Pandolfo patriarch, Andrea I, begins producing fine wines from the Zibbibo (Muscat) grape and the legend begins.

Not satisfied with his success on Pantelleria, the Pandolfo patriarch sells the farm in 1880, moves the family to Tunisia, and purchases virgin land to continue his passion for winemaking. The family brand quickly becomes regular cargo at the Port of Tunis bound for the finest wine markets of France.

Hold on there! I thought you said this was an odyssey?

I did. It’s a real-life odyssey with plenty of drama lurking just up ahead. Ready? Mother Nature strikes Pandolfo’s vineyards in 1938 as a vine borer lays waste to the vineyards. Diseased plants are burned and replaced by newly-grafted plants, and soon vines take root, the earth greens, and grapes start coming out in bunches.

But wait! The plot thickens and gets worse. MUCH WORSE. In May 1964, the Tunisian National Assembly decrees the expropriation of all foreign-held land; so, the Pandolfos and their entire crew pack up their belongings and, like Ulysses, follow the winds up the Italian coast and resettle in the shadows of Capo di Circeo.

A small estate — Cantina Sant’Andrea, named in honor of Andrea I — is purchased in Borgo Vodice (LT) in the Lazio’s Agro Pontine. The family tills the bittersweet land, the first vintage is born in 1968, and the Pandolfo legend is given new life. Today, the estate boasts an array of 29 different wines and spirits divided into two distinct lines: Linea Classica (Classic Line) and Selezione Acquerelli (Watercolor Selection).

As the winery’s homepage attests (www.cantinasantandrea.it), the link between the Pandolfo family, Ulysses, and the sorceress Circe is alive and well. You could say the Pandolfos, after their 150-plus-year personal odyssey, have finally returned home to their private Ithaca, just like Ulysses did so many centuries ago in Homer’s The Odyssey.