Towering above us at 9,724 ft was the Zugspitze, Germany’s tallest mountain.  Although it was two in the afternoon and the sun was shining, it was April and the thermometer showed zero degrees.  I looked at my friends nervously.  Are we really going to do this? 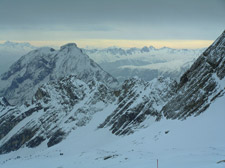 Igloos first appeared in Canada and Greenland as temporary houses for Inuit hunters and quickly became a well-known symbol of life in cold climates.  Now, anyone brave enough to fill their backpack with wool socks, long underwear, and extra sweatshirts can spend the night in an igloo in the Alps.  Open for the 2006/2007 season from December 25th to mid-April, Iglu-Dorf, Ltd. constructs igloo villages every winter atop the Zugspitze, Germany’s tallest mountain, and four other mountaintops in Switzerland.

Two friends and I were brave enough to give it a try—and we are thankful we did.

Not the domed building shaped by ice bricks as usually pictured, the igloo that we found was actually an ice maze built into a block of snow with a dining room, sleeping rooms, and a bathroom, coming off a hallway.  Filled with wooden tables and ice benches covered in beige sheepskins, the dining room also houses a bar where visitors first enjoy a warm welcome drink of glühwein.  Later, guides laden the tables with large breadbaskets and we stuffed ourselves with a fondue dinner made with rich Gruyère cheese.

The sleeping rooms are actually ice caves carved into the snow with two candles for light, a thick pad, and sheepskins.  A hanging curtain separates the room from the hallway.  “Standard rooms” generally sleep up to six people; so two different parties may share a room.  We were fortunate enough to have the room to ourselves.

The night started with a long, seemingly difficult trek through the snow to a high point.  We ate snow to hydrate ourselves and watched the sun slowly sink behind the Alps.  Later we soaked our muscles in an outdoor whirlpool hot tub, surrounded by snow with a clear night sky full of twinkling stars.

The stillness found just outside the igloo is amazing peaceful—standing thousands of feet above the earth in a winter wonderland in complete silence. We snuggled into our insulated sleeping bags made for Arctic expeditions (still wearing our hats, scarves, and gloves), and then awoke to a cup of tea brought right to our sleeping bag.  We stepped outside for a view of the bright sun rising above the mountains.  The adventure ended with a trip down to the mountaintop restaurant for a traditional German breakfast.

It may sound crazy to pay money to spend the night in a building made of snow and ice when the thermometer reads zero, but I found the thrill of experiencing the Alps in a whole new way well worth it.  For your own unique evening in an igloo, visit www.iglu-dorf.com for more information on available dates and prices.