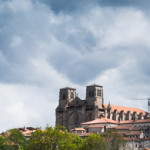 By Richard Alexander ITWPA Member The ancient Abbey of Saint Robert sits 3,500 feet above sea level in La Chaise Dieu, a tiny village in southwestern France. Deep in the vast Livradois forest, it’s a colossal stone structure in one of France’s wildest, least-populated regions -- a surprising setting for the major international festival of classical music staged there every … END_OF_DOCUMENT_TOKEN_TO_BE_REPLACED