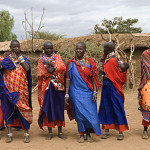 By Dan Reich Photos by Ellen Goldstein  On the outskirts of Amboseli National Park in Kenya, we visited a small Maasai Village to learn about the lives and customs of its inhabitants. But after discovering that we were Americans, everyone in the village wanted to know: were we going to vote for Obama? … END_OF_DOCUMENT_TOKEN_TO_BE_REPLACED