by Gloria Casale The 12-foot spire of an Agave parryi, the desert plant that blooms only once in its lifetime, stands regally on a quiet side street … the 300-year-old San Felipe Neri Church, quiet and peaceful, draws worshipers and visitors through its arched, stucco gates … Native American artisans sell their wares on blankets beneath La … END_OF_DOCUMENT_TOKEN_TO_BE_REPLACED

by M. Ruth Little A Den of Iniquity…my Father had warned me about this from childhood.  He never told me exactly what it was, but as I opened the door to this offbeat joint, I was sure this was it. … END_OF_DOCUMENT_TOKEN_TO_BE_REPLACED 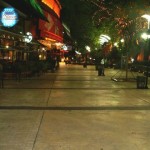 by Stan SinbergI was wondering how they’d celebrate New Year’s Eve in Buenos Aires, given that on a regular Saturday night many clubs don’t even open until 1AM, and don’t fill up until much later. Still, what I discovered shocked me. … END_OF_DOCUMENT_TOKEN_TO_BE_REPLACED 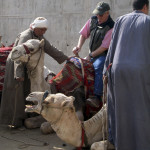 by Ray Batson Camels are nasty creatures, never mind that serene, dopey look that appears in peaceful pictures.  They are bad tempered and have really ugly teeth. On the other hand, they are surprisingly smooth-riding, and quiet. They don’t have hooves, so they don’t clop on pavement. We learned all this stuff when we went for a camel ride in Cairo, hard by the … END_OF_DOCUMENT_TOKEN_TO_BE_REPLACED

by Stan Sinberg Dateline, Argentina – I’m in Ushuaia, the southernmost city in the world, only 500 miles from Antarctica, about to embark on a five day/four night cruise that will cut me off from all forms of civilization. In other words, a cruise without… internet! … END_OF_DOCUMENT_TOKEN_TO_BE_REPLACED