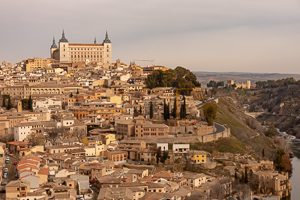 Toledo is a UNESCO World Heritage city so there is a lot to see and really deserves more than the few hours we spent. To get there from Madrid, take a quick 30-minute ride from Madrid Atocha train station on the national railway for €11 ($14.50) per person each way.

At the station in Madrid, there are a number of ticket vending machines scattered throughout the station, but the counter in the garden-like concourse is where you get your tickets to Toledo if you didn’t purchase them online. This can be confusing, as the Atocha Station services the Metro, commuter, medium, and long-distance trains and they all have separate ticketing. You will need to pass through security to board the train so be prepared to have your bags and person scanned.

Upon arrival in Toledo, we were first impressed by the Moorish influence in the architecture of the depot. Exiting the terminal, we were greeted by an assortment of taxis and tour operators. We decided that the Toledo City Tour, a double-decker hop on – hop off the bus, would be the best for us given the few hours that we had. For about €15 ($19.85) each, we were able to use the bus to navigate what is a very hilly city while identifying the major places that we wanted to see. The fare also included a guided tour of La Catedral Primada Santa María de Toledo, the main cathedral.

The bus loop is relatively short with 10-stops plus the railway station. Heading out from the station we cross the Tagus River, the longest on the Iberian Peninsula, and climb a mountain road that provides excellent panoramic views of the city and Roman ruins. The bus will make a five-minute stop at one of the points for photos. 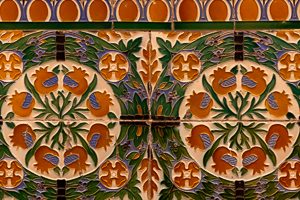 Back on the bus, we hear, via headsets, in our own language, the history of the city including its Roman roots. We also learn that the city is the center of Catholic, Muslim, and Jewish culture.

The bus returns to the town and winds its way up narrow streets where we get off at the stop closest to the cathedral. A narrow and hilly walk guided by Google Maps on my smartphone gets us to the enormous Cathedral. With an assigned time to meet our guide, we had time to browse the area shops where you can purchase religious items and secular souvenirs.

Our guide took us through the massive church explaining the significance of the history, art, architecture, and artifacts. After more than an hour we parted company and looked for a place to eat. Tapas bars abound in the area. We enjoyed a light lunch of shrimp, chicken, and potato tapas with some wine for around €15 ($19.85) each.

We walked the ancient cobbled streets doing some shopping until it was time to return to the train station for our high-speed ride back to Madrid. Prior to boarding, we grabbed a soft drink and muffin at the station’s coffee shop.

There is much to see in Toledo but if you only have half a day; the bus and the accompanying cathedral tour are certainly an excellent option.