I originally thought of Angoulême, a few hours’ train ride south and west of Paris, as simply the starting point of a self-guided hike that my friends and I were taking in this region. To my surprise, I was captivated by all this city has to offer — antiquity, whimsical art murals, restaurants, and modern boutiques. Most important, it is where I discovered Pineau des Charentes — the younger, more delicate sister of cognac. Victor Hugo famously described cognac as “the Nectar of the Gods.” In that context, the hillside city of Angoulême is the heavenly nexus of this scenic cognac region.

Angoulême is enclosed in ancient city walls that crown the hill on which the city rests. The ramparts, dating before the Middle Ages, divide the Old Town from the suburbs, which cascade down the hill and out into the luscious river valley below. The Charente River was once used to transport salt, wine, paper, and lumber, among other products, making the city a key commercial center historically. Today it is known as the international comic strip and cartoon capital, and hosts the International Comic Strip Museum in a former warehouse on the banks of the river.

To acknowledge such a distinction, a group of artists has painted 20 quirky wall murals around the city. Our first mural sighting was that of an intrepid hiker with rumpled socks on the wall in the tourist office where we found an English language brochure that maps out the locations of the murals around town. 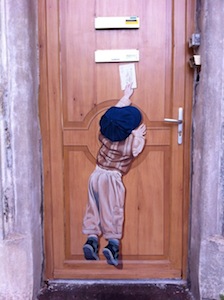 You may be wandering down a street and come upon a small boy sticking a letter in the mail slot of a door. A second look reveals that neither he nor the door is real! Rounding a corner, you encounter a zany mother and son, possibly stopping for traffic. One mural called “La Fille des Remparts” spans four vertical stories on the side of a hotel.

The city’s Hotel de Ville (Town Hall) is a former castle, surrounded by lovingly maintained gardens.  Renovated in the late 1800s, it retains two towers from the 13th through the 15th centuries. Les Halles is Angoulême’s impressive iron and glass food market. Inside, it bustles with vendors selling cheese, vegetables and fruits, flowers, fresh seafood, baguettes, and meats. The market’s espresso bar also has a small lunch menu that includes a tasty house white wine.

From Les Halles, we followed the old city walls, taking in expansive views across the valley with glimpses of the river far below. We also eyed the steep pathway that zigzags down to the river’s edge and would be our route out of town when we set off on our hike.

Our walk took us past the Lycee, with teenagers clumped outside in groups, smoking, talking, and eating lunch. From there, we followed the walls to the modest Saint Pierre Cathedral. Dating from the 13th century, the white limestone of the church’s interior has recently been cleaned and restored, which sets off the rich blues, reds, and greens in its stained glass windows. Without the excessive ornamentation often seen in churches, Saint Pierre is a peaceful respite from the city sounds outside.

I would never have known to visit this engaging city before undertaking our hike through this serene region of France. BelleFrance (http://www.bellefrance.co.uk/) made our hotel arrangements along the hiking route and moved our luggage from one hotel to the next, allowing us to hike with only a light backpack. The company also provided helpful narrative directions and maps, making ours an easy self-guided walk.